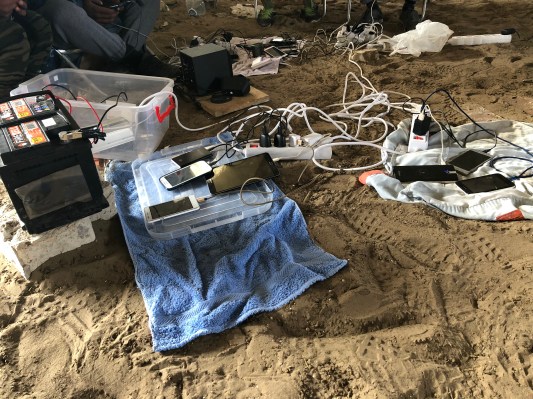 Few would equate human life with battery life, but for many migrants escaping war or famine, a single percentage point of battery can mean getting the right information at the right time – or not surviving at all.

Smartphones today have become an integral part of a forced migrant’s journey. From navigating mountains in Central Asia using Google Maps to staying connected with family back home via WhatsApp, smartphones have transformed the migrant experience – though not always for the better.

In Eastern Europe, many migrants pushed back from Hungary stay along the border on the Serbian side in abandoned buildings. Volunteers visit these sites to bring supplies, including repurposed car batteries that migrants use to charge their phones.

At one abandoned building less than a mile from the Hungarian border, migrants huddle around one car battery to charge their phones, and they all agree about the importance of battery life to them. Many asked for a power bank to enable them to charge their phone when outlets are not available. Between each other, they constantly compare notes on what apps use up the most battery power, and remind each other to close apps when not in use.

Nashid, a migrant from Pakistan taking shelter in this building, says one of his primary needs at this remote outpost is for a way to charge his phone. With no regular access to electricity, he depends on the visits of volunteers to be able to charge his battery, concocting all sorts of ways to keep it alive until their next visit. Some of his strategies include making sure his phone is turned off when he sleeps at night or if he naps during the day, as well as using the lowest brightness level possible. He swears that taking out a dead battery and shaking it repeatedly provides him with a few extra minutes of phone use.

For many migrants traversing Eastern Europe to get to Western Europe, the Hungarian-Serbian border presents the final frontier. Once in Hungary, migrants will have entered the Schengen Area, the 26 EU-member zone with no border controls, making their destination countries in Western Europe significantly easier to reach. Increased security though has made this border crossing significantly harder – with many migrants being beaten and pushed back into Serbia dozens of times before they eventually make it across.

Nashid has been trying to cross into Hungary from Serbia for the past eight months. He left his family, including a wife and two kids, back in Pakistan before setting out to Europe. He says he uses WhatsApp to keep in touch with them and to stay connected to his cousin in Paris – his ultimate destination. He admits, battery constraints aside, that his phone also provides him with a reprieve from long hours spent idly waiting every day. He tries to sneak a song or two, or watch a couple of Urdu-language videos on YouTube.

One journey, a million apps

Over the last few years, Serbia has taken on the role of a major transit point for migrants trying to make it to Western Europe. The Refugee Aid Miksalište Center in the Serbian capital Belgrade, a drop-in center open 24 hours a day, is staffed by NGOs that provide services to migrants in transit. As soon as you enter the Center, you again see migrants gathered around extension cords, charging their phones and using the Center’s free Wi-Fi to access their social media and Skype with friends and family back home. 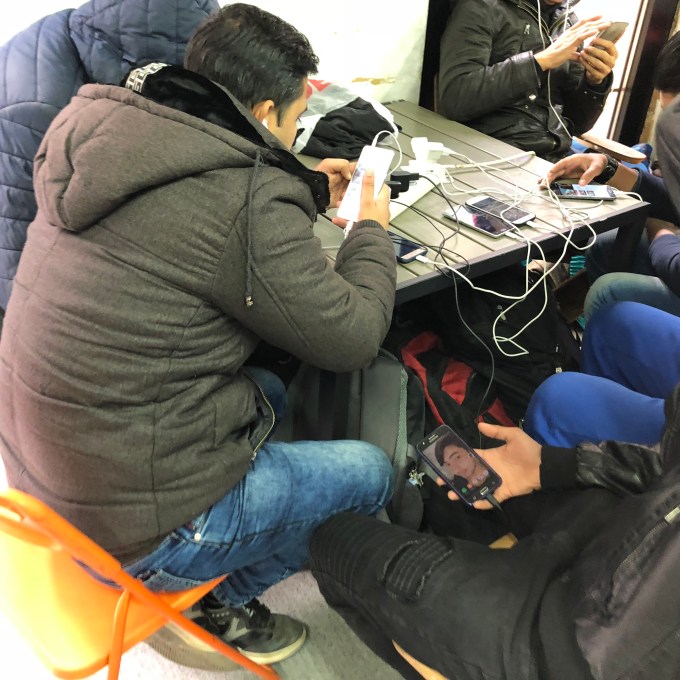 The same scene seems to repeat wherever migrants congregate. The nearly 70 million forced migrants across the world today have had to travel thousands of miles to get to a place of refuge. More than half of these migrants come from just three countries: Syria, Afghanistan, and South Sudan. Syrians, the single largest forcibly displaced population, have to traverse on average more than 1,400 miles just to get to Serbia’s border with Hungary on their long trek from Aleppo to Western Europe.

From getting directions, to learning languages, to simply accessing entertainment, smartphones have become vital for migrants on these grueling journeys that can last for months – if at the very least to get some emotional support by talking to loved ones they leave behind.

At the height of the European refugee crisis in the summer of 2015, when nearly a million Syrian refugees crossed into Europe to escape a brutal civil war, Facebook and WhatsApp chat groups sprung up to let migrants know of real-time developments on the road, which smugglers to trust, and what rates to negotiate. Dropped GPS pins and Google Maps turn directions into practical routes migrants can take. In some cases, migrants on sinking boats in the Mediterranean have helped coast guards find them by sending GPS signals from their smartphones.

Migrants download German, French, English, and other language learning apps on their phones to aid them in acculturating to their eventual destination while they’re still on the move. They use Google Translate to understand road signs in Bulgarian, Serbian, and Hungarian. And with migrant journeys breaking up families, smartphones have become migrants’ only way to stay connected.

In recognition of the importance of connectivity to forcibly-displaced migrants, the United Nations Refugee Agency (UNHCR) – launched “Connectivity for Refugees” in mid-2016. The initiative advocates for migrants’ right to connectivity; enables access through negotiated data rates for refugees, subsidized device prices, and internet access centers; and provides training to ensure migrants are able to fully take advantage of their smartphones. Two years in, the UNHCR plans to increase the initiative’s staffing and roll out connectivity programs beyond the current pilot countries of Jordan, Greece, Chad, Malawi, Tanzania, and Uganda.

Startups, for their part, have also been ramping up efforts to help migrants. Two Columbia architecture students, Anna Stork and Andrea Sreshta, cofounded LuminAid. A startup that makes the PackLite Max 2-in-1 Phone Charger, a solar-powered phone charger and light source that the cofounders have given away to displaced migrants. With the UNHCR estimating that up to a third of a forced migrant’s income is spent on connectivity, Phone Credit for Refugees has taken on providing migrants with free data access. Others, like GeeCycle, have instead focused on collecting used smartphones from around the world and distributing them to refugees fleeing conflict.

The challenge of misinformation 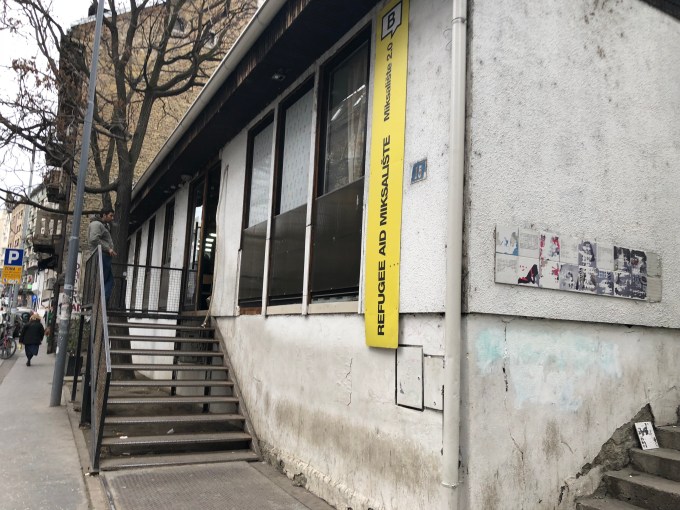 NGOs like Save the Children Serbia operate out of the Refugee Aid Miksalište, a drop in center with free WIFi and available plugs. (Photo by Ziad Reslan)

For all of their benefits though, smartphones have not always improved the journeys of forced migrants. The reliance on anonymous sources on social media to navigate routes has left migrants vulnerable to smugglers and traffickers looking to take advantage of their misfortune. Even information obtained from relatives can turn out to be erroneous – with heart-wrenching consequences.

Jelena Besedic, an Advocacy Manager for Save the Children Serbia, says that the spread of misinformation has been part of the reason for the rise of unaccompanied children traversing the Balkans from Afghanistan. Parents of kids as young as eight now stuck in Serbia were falsely told that, if their kids arrive safely in Western Europe, they’re entitled to bring their parents.

Misinformation of this sort about the ease of the asylum process can lead migrants to take on increasingly dangerous journeys, only to be disappointed with the reality once they reach their destination countries. This misinformation has led organizations, like the International Organization for Migration, to start information campaigns at source countries to better educate would be migrants about the dangers of setting out west. In addition, increasingly nationalist governments, like Hungary and Italy, have started campaigns targeting the smartphones of migrants with text messages and online ads to dissuade them from coming to their countries in the first place.

Familial pressure on migrants may have always been a reality, but access to smartphones has made that pressure incessant and instantaneous. Stuck at the border between Serbia and Hungary, Nashid says he would never have made the trek if he knew what he would have to face on his more than 4,000-mile journey from Pakistan to France. But while he was still in Pakistan, he had received messages non-stop from his cousin in Paris telling him how easy it was for him to get there and how plentiful jobs are in France. Once Nashid left Pakistan, messages from his wife and two kids constantly asking whether he’d arrived in Paris have made the idea of going back home impossible.

Nashid ends our conversation by asking me to confirm a rumor he’s heard on WhatsApp. Is it true, he asks, that there are now personal battery banks that one can charge like a phone that extend a smartphone’s battery life by up to 100 hours? A charger like that, he stresses, would make a world of a difference to him out here miles away from the nearest plug.