The European Parliament has just voted to back controversial proposals to reform online copyright — including supporting an extension to cover snippets of publishers content (Article 11), and to make platforms that hold significant amounts of content liable for copyright violations by their users (Article 13).

Today’s plenary vote in the European parliament was on amended proposals that had been rejected by MEPs in a vote in July with parliamentarians arguing for a fuller debate and more balanced measures.

The vote is a major victory for MEP Axel Voss who has been driving the copyright reform.

MEPs largely backed Voss’ amended proposals today which had narrowed the scope of the rejected text, such as, in the case of Article 11, by allowing for links to contain individual words from the linked to publishers’ content — an attempt to respond to critics’ contention that the measure would outlaw hyperlinks (which can often contain the headline of an article).

On Article 13 Voss’ amended proposal had reduced the scope to platforms that both host “significant” amounts of content and also “promote” them. It also includes an exception for small businesses.

As the votes were announced a visibly delighted Voss beamed, clapped and hugged his seat neighbours, as well as giving a broad thumbs up to all those watching. 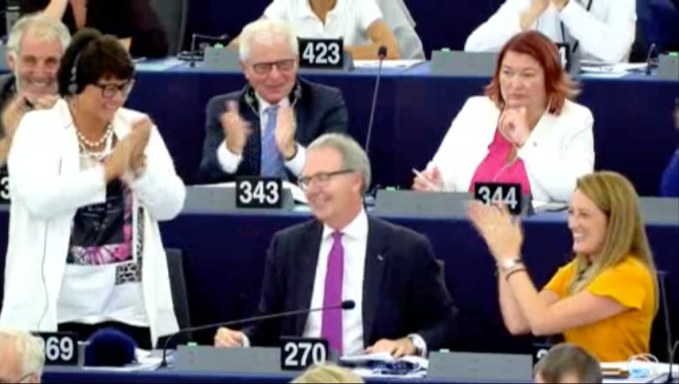 But critics and free speech advocates described it as a catastrophe.

MEP Marietje Schaake expressed disappointment with the result, telling us: “The Parliament squandered the opportunity to get the copyright reform on the right track. This is a disastrous result for the protection of our fundamental rights, ordinary internet users and Europe´s future in the field of artificial intelligence. We have set a step backwards instead of creating a true copyright reform that is fit for the 21st century.”

“Members of the house, a heartfelt thanks for the job that we have done together. This is a good sign for the creative industries in Europe,” said Voss after the vote, as he asked for the report to be sent back to committee to begin institutional negotiations with Member States, via the European Council.

There was just one interruption prior to that last vote, with a single MEP standing up to denounce the result as “an enormous strike against freedom of speech on the Internet”. Proceedings continued.

Other amendments that had been tabled by MEPs but were rejected by the parliament as a whole included ditching the reforms entirely and leaving the current law as is.

Welcoming the parliament’s vote in a statement, the European Commission’s VP for the Digital Single Market Andrus Ansip and commissioner for Digital Economy and Society, Mariya Gabriel, put out this joint statement:

We welcome today’s vote at the European Parliament. It is a strong and positive signal and an essential step to achieving our common objective of modernising the copyright rules in the European Union.

Discussions between the co-legislators can now start on a legislative proposal which is a key element of the Digital Single Market strategy and one of the priorities for the European Commission .

Our aim for this reform is to bring tangible benefits for EU citizens, researchers, educators, writers, artists, press and cultural heritage institutions and to open up the potential for more creativity and content by clarifying the rules and making them fit for the digital world. At the same time, we aim to safeguard free speech and ensure that online platforms – including 7,000 European online platforms – can develop new and innovative offers and business models.

The Commission stands ready to start working with the European Parliament and the Council of the EU, so that the directive can be approved as soon as possible, ideally by the end of 2018. We are fully committed to working with the co-legislators in order to achieve a balanced and positive outcome enabling a true modernisation of the copyright legislation that Europe needs.

Also very happy with the result a swathe of creative industries. The European Publishers Council welcome the adoption of the Publisher’s neighbouring right. In a statement its exec director, Angela Mills Wade, said: “Today, we give credit to MEPs who voted for press freedom, democracy, professional journalism and European values.  We thank the Rapporteur, Axel Voss, MEP, for working tirelessly to achieve a balanced outcome.”

PY#RATION: New Python-based RAT Uses WebSocket for C2 and Data Exfiltration
Black Basta Deploys PlugX Malware in USB Devices With New Technique
Why your data is more valuable than you may realize
Report: Stripe tried to raise more funding at a $55B-$60B valuation
Are you in control of your personal data? – Week in security with Tony Anscombe