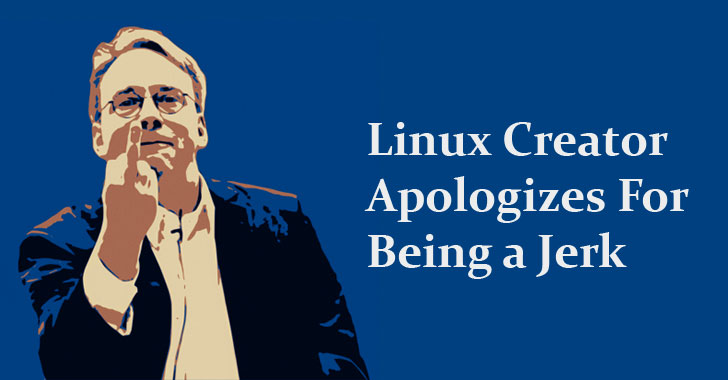 What just happened would definitely gonna surprise you.

Linus Torvalds—father of the Linux open-source operating system—finally admitted his behavior towards other developers in the Linux community was hurting people and Linux.

In a surprising move this weekend, Torvalds apologized for insulting and abusing other developers for almost three decades and took a break from the open-source software to work on his behavior.

In an email to the Linux Kernel Mailing List (LKML) on Sunday, Torvalds said that he was confronted by people of the Linux community this week about his lifetime of not understanding emotions, and apologized for his personal behavior that has hurt people and possibly has driven some of them away from working in kernel development altogether.

Torvalds wrote, “I need to change some of my behavior, and I want to apologize to the people that my personal behavior hurt and possibly drove away from kernel development entirely.”

“I am going to take time off and get some assistance on how to understand people’s emotions and respond appropriately,” Torvalds added.

Torvalds is working on the open source Linux operating system kernel since its birth in 1991, but over the decades, he has shown a bad attitude towards fellow programmers, open-source lawyers and other kernel developers, which has turned developers away from contributing to Linux.

Besides Linux which is the underlying layer behind Google’s ubiquitous Android, Torvalds also created git, the technology that underlies smaller companies including GitLab, as well as popular code repository hosting service GitHub that Microsoft recently acquired for $7.5 billion.

“Linus Torvalds deserves a Nobel Prize for git, the Turing Award for Linux and [a] swift kick in the ass for almost everything else he’s done,” a Twitter user GonzoHacker tweeted in July.

Torvalds said he looked at himself in the mirror, and he wasn’t happy, realizing that “it wasn’t actually funny or a good sign that I was hoping to just skip the yearly kernel summit entirely, and on the other hand realizing that I really had been ignoring some fairly deep-seated feelings in the community.”

Torvalds’ lengthy note further reads that he hope automated tools like an email filter that removes curse-words could be a part of the solution.

However, Torvalds admitted that he’s “not an emotionally empathetic kind of person, and that probably doesn’t come as a big surprise to anybody.”

“The fact that I then misread people and don’t realize (for years) how badly I’ve judged a situation and contributed to an unprofessional environment is not good,” Torvalds added.

However, Torvalds has not revealed how long he plans to be away from the Linux kernel, but has made arrangements to ensure that Linux is maintained without him.

While many praised his decision of apologizing and expressing a willingness to change his behavior, some people remained skeptical over whether his recent commitment will make any difference or sense after decades of this bad behavior.

Jumia’s investors rethink their stakes — for better and worse
Black Basta Deploys PlugX Malware in USB Devices With New Technique
Peacock tops 20M subscribers in Q4 as losses widen
Mastodon vs. Twitter: Know the differences
Are you in control of your personal data? – Week in security with Tony Anscombe