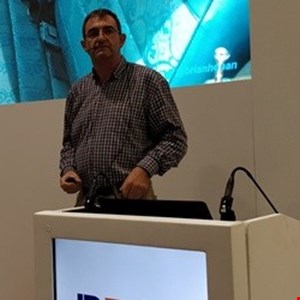 Advancements in the motoring industry need to be replicated in cybersecurity to provide a safer online future.

Speaking in the cybersecurity keynote at IP Expo in London, BH Consulting CEO Brian Honan related a recent instance where we was speaking to his father about buying a new car, and how car safety had increased since the 1940s, and how fatalities in car accidents had decreased as a result. This has resulted in cars using safety as a selling point, as well as including automation technology and following law enforcement as a standard.

Referring to the 2018 Verizon Data Breach Investigations Report, Honan pointed at one finding that 30% of incidents are caused by malware, and called this “a battle we’ve been having since the 1980s and we’re still losing.”

Saying that efforts to aid users, industry and devices have failed, and government leadership has not been good enough, Honan said that it will cost a small fortune to get a new car on the road, but with an IoT device or IP-enabled camera, we only worry that it blows up or goes offline. “It can be as insecure and we are putting it on our networks and making ourselves more insecure.”

He concluded by arguing that we need to move away from the old ways of thinking of security as being a patch, and look at new ways and break out of silos. “No one clicking on a mouse should rule our financial or social lives, or should be our biggest worry.”

In closing he asked who would be the Volvo of the cybersecurity industry, referring to Nils Bohlin who gave away the patent for seatbelts as they were a safety feature. “Who leads, and gives ideas and technology away to keep others safe?”