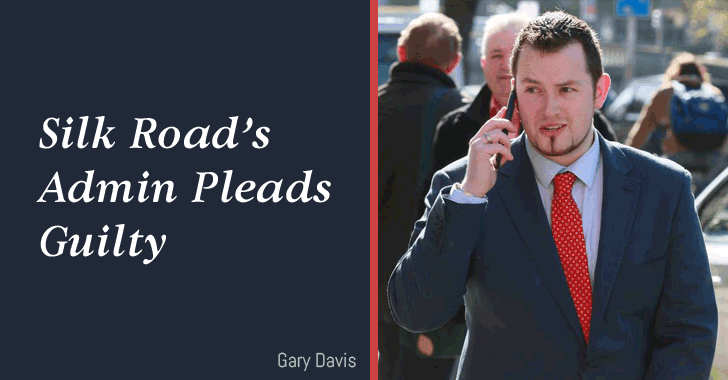 An Irish national who helped run the now-defunct dark web marketplace Silk Road pleaded guilty on Friday to drug trafficking charges that carry a maximum sentence of 20 years in prison.

Gary Davis, also known as Libertas, was one of Silk Road’s site administrators and forum moderators for Silk Road, then-largest underground marketplace on the Internet used by thousands of users to sell and buy drugs and other illegal goods and services.

Silk Road went down after the law enforcement raided its servers in 2013 and arrested its founder Ross William Ulbricht, who has been sentenced to life in prison after being convicted on multiple counts related to the underground drug marketplace.

The FBI also seized Bitcoins (worth about $33.6 million, at the time) from the website. Those Bitcoins were later sold in a series of auctions by the United States Marshals Service (USMS).

According to a press release published by US Department of Justice, Davis helped the black market website “run smoothly” and provided “customer support” to Silk Road users for assisting them with their buyer or seller accounts on the site for several months in 2013.

Davis kept Ulbricht and other site administrators informed about any issues reported by Silk Road users and received a weekly salary for this job.

Davis was arrested in Ireland in January 2014 and indicted by U.S. federal prosecutors in 2013. He fought extradition in Irish courts, arguing that incarceration in the U.S. could hurt his mental health and endanger his life, violating his fundamental rights.

However, Ireland’s Supreme Court rejected Davis’ arguments, and he was extradited to the United States in July 2014.

“Silk Road was a secret online marketplace for illegal drugs, hacking services, and a whole host of other criminal activity,” Manhattan U.S. Attorney Geoffrey S. Berman said in a statement.

“As he admitted today, Gary Davis served as an administrator who helped run the Silk Road marketplace. Davis’s arrest, extradition from Ireland, and conviction should send a clear message: the purported anonymity of the dark Web is not a protective shield from prosecution.”

Prosecutors said Silk Road was responsible for selling more than $200 million worth of illegal drugs and other contraband.

Davis pled guilty to one count of conspiring to distribute massive quantities of narcotics, facing a maximum of 20 years in prison. He is expected to be sentenced on 17 January 2019 by Judge Furman.