Chinese startups rule the roost when it comes to total reported venture dollars raised so far in 2018. That is, mostly. In one key category at least — software-as-a-service, better known as SaaS — they do not.

Ant Financial raised the largest-ever VC round in June, a mind-boggling $14 billion in Series C funding. And nearly a dozen privately held Chinese companies, including SenseTime, Du Xiaoman Financial, JD Finance and ELEME, raised $1 billion (yes, with a “b”) or more in single venture rounds thus far in 2018.

But if there’s one thing to note from that shortlist of 2018’s largest China venture rounds, it’s this: almost all of them involve consumer apps and services. Despite being one of the largest economies in the world and currently holding the top spot in the national venture dollar ranks, China doesn’t seem to have too much in the way of enterprise-focused software funding.

But why trust your gut when the trend is borne out in the numbers? In the chart below, we show the top five global markets for SaaS investment (plus the rest of the world). We compare each market’s share of SaaS-earmarked funding against their share of total venture dollars raised in 2018 so far. 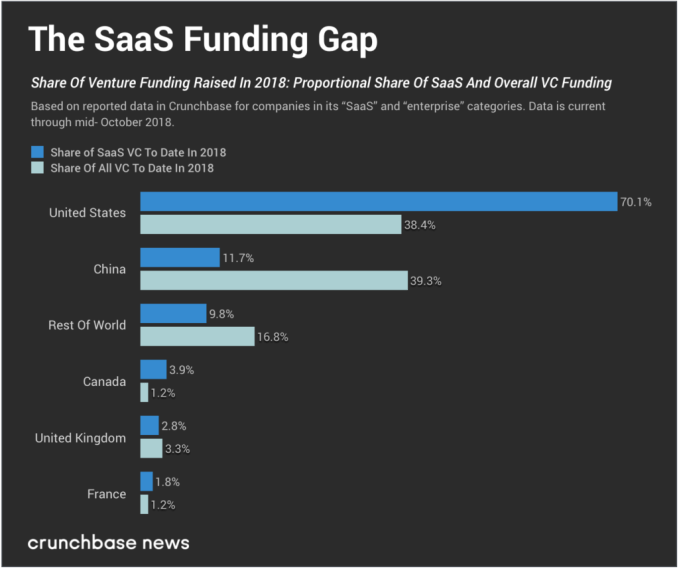 As of mid-October (when we pulled the data for the above chart), Chinese companies accounted for about 39.3 percent of venture funding raised in 2018. Compare that to 38.4 percent for U.S.-based companies, overall. In this respect, the venture markets in the U.S. and China are running neck-and-neck.

Yet for SaaS funding, the China-U.S. gap is about as wide as the Pacific Ocean. The U.S. — top ranked by this measure — accounted for approximately 70.1 percent of known SaaS startup funding. China, by contrast, accounted for just 11.7 percent. No even matchup here. It’s not even close.

This asymmetry goes beyond just aggregate dollar figures. The contrast is starker when we use a slightly more exotic measure for the market.

One of our favorite (if somewhat arbitrary) metrics at Crunchbase News is the count of supergiant venture rounds. These VC deals weigh in at $100 million or more, and they’re reshaping both sides of the venture market for founders and funders alike.

Keep in mind that, in general, U.S. and Chinese markets are fairly even in their output of supergiant venture rounds. However, that’s not the case when we look specifically at SaaS rounds, where the counts and dollar volumes involved are so different.

At this point it’s unclear, apart from funding metrics, what differentiates the U.S. SaaS market from the rest of the world’s. What conditions exist in this market that don’t exist elsewhere? And are those conditions replicable in a local market with a still-nascent SaaS ecosystem? These are questions meriting a follow-up. Even though its cause might be unclear, for now, it’s nonetheless important to mind the gap. 🚇