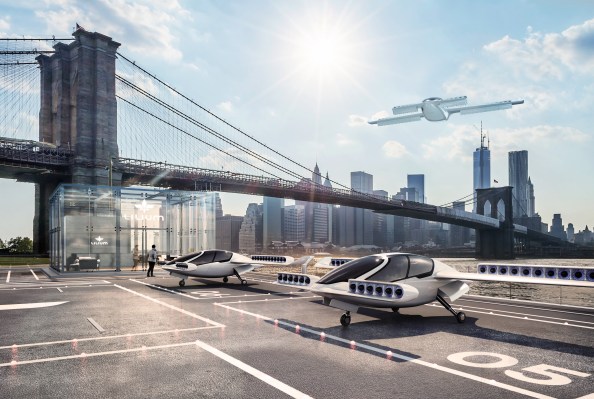 Lilium, the developer of a new, electric, vertical take-off and landing vehicle for a novel flying taxi service, has poached some pretty big former executives from Airbus and Audi as it builds out its technology and gets ready to bring its service to market.

Mirko Reuter, the former head of automated driving at Audi, has come on board as the head of autonomous flight at Lilium. Jakob Waeschenbach, who worked as the head of equipment installation at Airbus, and Rochus Moenter, former vice president of Airbus’ finance and leasing group, have joined Lilium as head of aircraft assembly and general counsel and head of legal, respectively.

Co-founded in 2015 by Daniel Wiegand, Sebastian Born, Patrick Nathen and Matthias Meiner, Lilium’s vision is to create a network for its proprietary vertical take off and landing vehicles that will slash the costs of air travel and can ostensibly take a passenger from Paris to London in about an hour.

Reuter, a longtime head of automated driving at Audi will be responsible for leading and developing the process and technologies necessary to bring autonomous aircraft systems to market, the company said in a statement.

“I am deeply committed to our mission of creating a revolutionary service that enables effective and affordable transportation that is widely used among all sectors of society. At Lilium, we are building a new and revolutionary way of transport, and I am very excited to be a part of it,” said Reuter, in a statement.

Lilium’s bulking up its executive team as it prepares for a rollout of its first vehicles in 2019, according to news reports. In 2017, the company raised $90 million in fresh funding from investors including Tencent; LGT, the international private banking and asset management group; Atomico, Lilium’s Series A backer founded by Skype co-founder Niklas Zennström; and Obvious Ventures, the early-stage VC fund co-founded by Twitter’s Ev Williams.

The funding, and the executive hires, lend credence to Lilium’s business in an increasingly competitive industry (yes, the flying taxi industry is competitive).

German automaker Daimler joined a consortium of investors that backed Volocopter with roughly $28.5 million and the ride-hailing service Uber is working with Brazil’s Embraer and the Slovenian company, Pipistrel, to develop its own flying taxi. Indeed, the airplane manufacturer, Airbus, has its Vahana autonomous flying taxi, which it is hoping to bring to market in the coming years.