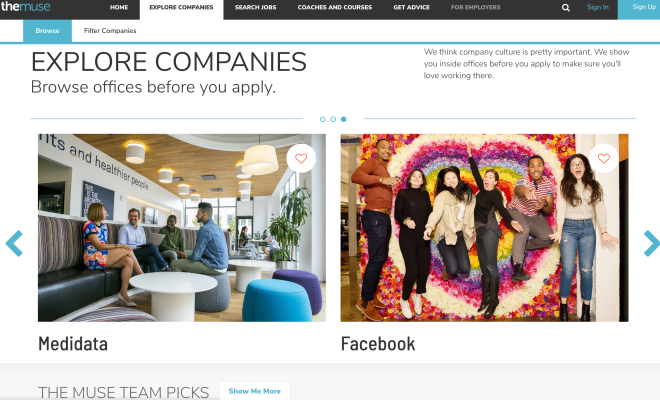 The Muse, a New York-based, content-rich recruitment site that matches job seekers and all kinds of information about different career paths, as well as with companies that are hiring, has made it second acquisition, picking up TalentShare, a year-old, HR software-as-a service company. TalentShare has been focused on enabling companies to share high-quality candidates that they didn’t hire but would recommend to other companies that are in the market for talent.

Terms aren’t being disclosed, but four of TalentShare’s five-member team are joining The Muse. In fact, those new employees will help The Muse in establishing a second office in San Francisco.

We talked earlier this week with The Muse’s cofounder and CEO Kathryn Minshew about TalentShare, whose tie-up with the company comes roughly one year after The Muse made its first acquisition, bring into the fold Brand Amper, a Chicago-based startup whose tools enabled companies to collect data like employee sentiment.

As Minshew explains it, The Muse won’t incorporate everything that TalentShare has built. Its interest instead centers on one aspect of the startup’s technology that helps brands better understand from where candidates come. “The old paradigm was for companies to post jobs online and assume that their post was where candidates discovered the job,” said Minshew. “Now we know that candidates are doing tons of research first. They may Google the company, or go to a career site; they may land on numerous platforms before they apply. It’s akin to a high consideration purchase like a vacation or a car. People aren’t buying based on a single [data point].”

In other words, the more that employers understand about which touch points are encouraging strong candidates to apply, the better they can invest the money they spend on recruiting. The Muse wants to help them understand those pathways.

The Muse is now seven years old, employs roughly 120 people, and Minshew says that 75 million users now check The Muse per year for its job listings and career advice. Two-thirds of that population is under the age of 35. Roughly 85 percent are college educated. Lastly, says Minshew, about 55 percent of its audience is female.

The company, which makes money off subscription packages paid by employers, has raised roughly $30 million to date, including from Icon Ventures and Aspect Ventures.