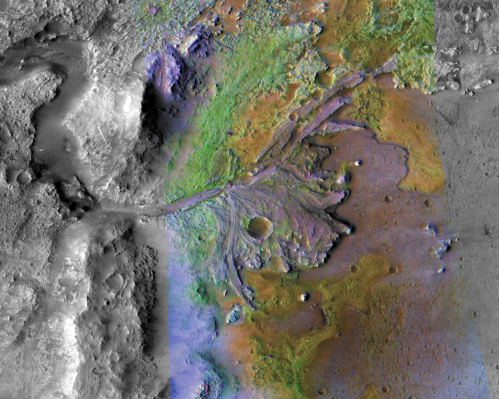 Five years and sixty potential locations later, NASA has chosen the Jezero Crater as the landing site for its Mars 2020 rover mission.

Slated to launch in July the Mars 2020 rover mission will touch down at the Jezero Crater as NASA’s exploration of the Red Planet enters its next phase.

The rover will be looking for signs of habitable conditions — and past microbial life — while also collecting rock and soil samples that will be stored in a cache on the Martian surface.

Alongside the European Space Agency, NASA is already studying future missions that will allow the agencies to retrieve the samples and return them to earth. According to NASA, this new landing is the first step of a planned decade-long exploration of Mars.

“The landing site in Jezero Crater offers geologically rich terrain, with landforms reaching as far back as 3.6 billion years old, that could potentially answer important questions in planetary evolution and astrobiology,” said Thomas Zurbuchen, associate administrator for NASA’s Science Mission Directorate, in a statement. “Getting samples from this unique area will revolutionize how we think about Mars and its ability to harbor life.”

The crater is located on the western edge of Isidis Planitia, a giant impact basin just north of the Martian equator, with some of the oldest and most scientifically interesting landscapes Mars has to offer, according to NASA scientists.

Mission scientists believe the 28-mile-wide crater once held an ancient river delta, and could have collected and preserved organic molecules and other potential signs of microbial life from the water and sediments that flowed into the crater.

NASA thinks it can collect up to five different kinds of Martian rock, including clays and carbonates that may preserve indicators of past life. There’s also the hope that minerals have been swept into the crater over the last billion years which Rover could also collect.

It was the geologic diversity of the Jezero crater that ultimately tipped the scales for NASA scientists, but the site’s contours will make it a bit more tricky for NASA entry, descent and landing engineers, according to a statement from the agency.

“The Mars community has long coveted the scientific value of sites such as Jezero Crater, and a previous mission contemplated going there, but the challenges with safely landing were considered prohibitive,” said Ken Farley, project scientist for Mars 2020 at NASA’s Jet Propulsion Laboratory, in a statement. “But what was once out of reach is now conceivable, thanks to the 2020 engineering team and advances in Mars entry, descent and landing technologies.”

This Mras mission will be the first to feature new Terrain Relative Navigation technologies to allow the rover to avoid hazardous areas during the “sky crane” descent stage — when the rocket-powered system carries the rover down to the surface.

The site selection is dependent upon extensive analyses and verification testing of the TRN capability. A final report will be presented to an independent review board and NASA Headquarters in the fall of 2019.

“Nothing has been more difficult in robotic planetary exploration than landing on Mars,” said Zurbuchen. “The Mars 2020 engineering team has done a tremendous amount of work to prepare us for this decision.  The team will continue their work to truly understand the TRN system and the risks involved, and we will review the findings independently to reassure we have maximized our chances for success.”

Now that the site has been selected, rover drivers and NASA’s science operations team can start planning for the exploration of the crater once the rover is on the ground. Using information from Mars orbiters, they will map the terrain and try to identify regions that could be the most interesting for the rover to explore.