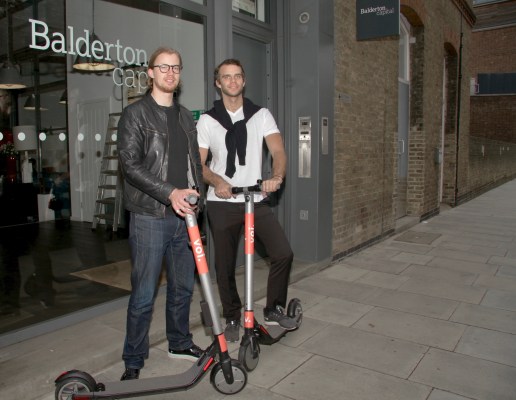 VOI Technology, an e-scooter startup headquartered in Sweden but with pan-European ambitions, has raised $50 million in Series A funding, confirming our earlier scoop. As I previously reported, London-based venture capital firm Balderton Capital has led the round, alongside LocalGlobe, Raine Ventures, and previous VOI backer Vostok New Ventures.

A source with knowledge of VOI’s early fundraising tells me this is in actual fact two rounds effectively being announced at the same time, although both VOI and Balderton say this is not the case. The e-scooter startup had previously raised around $3 million earlier this year.

What I do know, however, is the size of this new round got increased significantly very late on as VOI continues to gain early traction and the round became more competitive with a lot of VC interest. According to my sources, the initial target was $15 million at a pre-money valuation of between $35-40 million. Unfortunately, I haven’t been able to confirm the new valuation based on this much larger fundraise. Both VOI and Balderton declined to comment.

Launched in Sweden’s Stockholm in August 2018 by founders Fredrik Hjelm, Douglas Stark, Adam Jafer and Filip Lindvall, VOI has since expanded to Madrid, Zaragoza and Malaga in Spain. The plan is to use the new funding to continue to expand into new European markets. Belgium, the Netherlands, Luxembourg, France, Germany, Italy, Norway, and Portugal are said to be launching “in the coming months”. The VOI jobs page reveals that VOI is recruiting country managers for Denmark, Switzerland, Greece, Turkey, and Finland, too.

Like other e-scooter startups, VOI pitches itself as a way to ease traffic-clogged city centres and reduce pollution, with VOI’s scooters offering a “clean, efficient, cost-effective and zero emission” first-and-last-mile alternative to cars and taxis. After downloading the VOI app, you simply locate a nearby scooter on the street or via the app’s map, press the ‘ride’ button, scan the VOI QR code, and ride anywhere in the city. The company charges a €1 unlocking fee and a ride costs €0.15 per minute.

“We see that we’ve changed user behaviour drastically in a very short time period,” VOI CEO Fredrik Hjelm tells me. “We changed how people commute, people move themselves. We changed how people transport within cities almost instantly after they try the scooters for the first time”.

He says this has resulted in “very strong retention rates, recurring use, and also friend referrals”.

“I’m from up in the North in Sweden, and for me it’s very difficult to understand, and it’s absurd, why we have so many cars and why our cities are built for cars, taxes and trucks, and not for people, animals, scooters, bikes, and light electric vehicles,” explains Hjelm. “That’s more from an ideological perspective. For me, scooters power freedom”.

VOI is also talking up its “distinctive” European approach in the way the company works collaboratively with city authorities. This is very different to the ‘ask for forgiveness not permission’ mentality of Silicon Valley.

“When you are reading the news, you get the feeling that city politicians are against scooters. The reality is the other way around,” Hjelm says. “The only thing is that they want a say in this and how it should be operated, so we don’t end up in a scooter graveyard situation that we see in some U.S. cities… Pretty much every European city has some kind of ambition or vision to become less dependent on fossil fuel driven cars and other vehicles”.

Balderton’s entrance into the e-scooter market comes after three of the other “big four” London VC firms have already made U.S. investments in the space. Index and Accel have backed Bird, and Atomico has backed Lime.

Last month also saw Berlin’s Tier raise €25 million in Series A funding led by Northzone, in another attempt to create the “Bird or Lime of Europe,” even if it is far from clear that Bird or Lime won’t take that title for themselves (which is obviously the bet being made by Index, Accel and Atomico). And two month’s ago Taxify also announced its intention to do e-scooter rentals under the brand Bolt, first launched in Paris but also planning to be pan-European.

This has led some VCs to describe the e-scooter space in Europe as a venture capital “blood bath” waiting to happen. The thinking is that the market has become so competitive so early, a lot of VC dollars are going to be spent (and potentially wasted) before it is far from clear who will be the eventual winner. That feels quite unusual for Europe, where it is more common for competing VCs to back off or co-invest once one or two of the big firms (or Rocket Internet) have made their move or when there is a better-funded U.S. competitor on the horizon — a point I put to Balderton Partner Lars Fjeldsoe-Nielsen.

“Yeah, and I think if we kept doing that as a VC community, we would never see any billion dollar companies coming out of Europe,” he replies. “This is why we’re backing VOI. [But] I get your point: it’s up against large amounts of capital”.

Describing e-scooters as a massive opportunity to change that, Fjeldsoe-Nielsen says that in the last four weeks VOI has doubled it revenues and that Balderton is seeing the same kind of traction and market reaction as Bird and Lime in the U.S.

“We believe an equally big company can come out of Europe,” he adds.