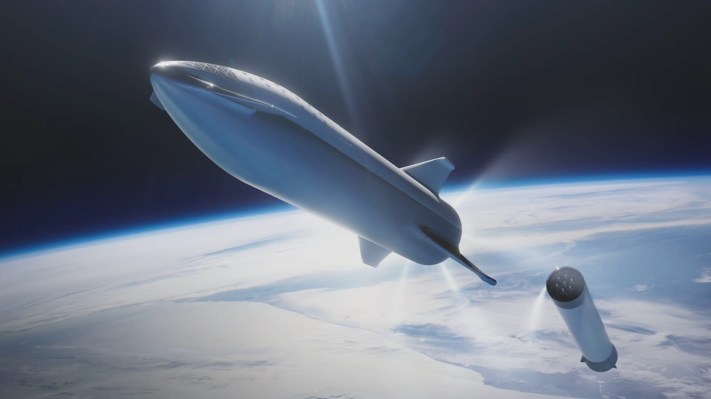 BFR, the monster rocket that will cost SpaceX roughly $5 billion to develop, has a new name.

SpaceX CEO Elon Musk tweeted late Monday night that he has renamed the company’s largest (and yet to be built) BFR rocket to Starship. Or more precisely, the spaceship portion will be called Starship. The rocket booster used to propel Starship from Earth’s gravitational grasp will be called Super Heavy.

Technically, two parts: Starship is the spaceship/upper stage & Super Heavy is the rocket booster needed to escape Earth’s deep gravity well (not needed for other planets or moons)

The BFR, meant to stand for Big Falcon Rocket or, ahem, anything else that might spring to mind, is designed to be a sustainable interplanetary spaceship. It will eventually replace SpaceX’s other rockets such as Falcon 9 and Falcon Heavy.

But as one of Musk’s Twitter followers noted, “unless this starship is sent on a mission to another star system it can’t be called a starship.” Musk upped the stakes for an already complex and costly project that is in its earliest stages by responding, “Later versions will,” presumably meaning that the future iterations of the Starship will leave our star system. The closest star system to our sun is the Alpha Centauri system, which is about 4.3 light-years from Earth.

The BFR has not yet been built; it’s in the early stages of development. And it has a long way to go — and by just about every measure, including investment. (Just 5% of SpaceX’s resources are currently dedicated to the BFR, according to Musk.)

Still, the company has made some progress. SpaceX signed Japanese billionaire entrepreneur Yusaku Maezawa to be the first private citizen to take a flight around the Moon in the BFR, a 240,000-mile journey slated for as early as 2023.

SpaceX is on its third design for the rocket, which Musk presented in September with a number of new details.

The design, which depicted a 118-meter long two-stage reusable spaceship capable of taking a 100-metric ton payload to Mars, is “the final iteration in terms of broad architectural designs for BFR,” Musk said in September.