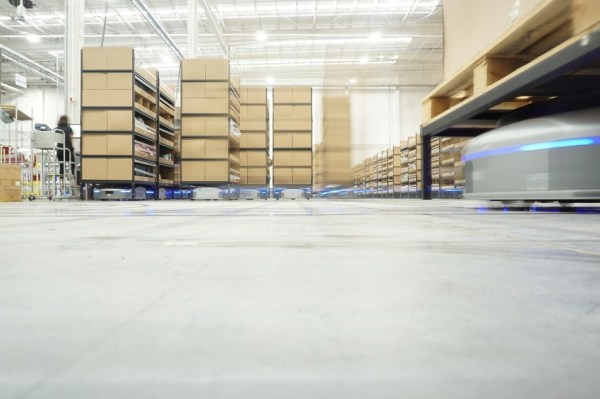 One of the most immediate — and already live — applications for robotics and artificial intelligence in general has been in using unmanned robots in warehouses and other environments, where they replace humans in repetitive jobs such as sorting and moving objects from A to B. Now, Beijing-based robotics startup Geek Plus (aka Geek+) says that it has raised $150 million to seize that growing opportunity by investing in product development, sales and customer service. Geek Plus says that this is the largest-ever funding round for a logistics robotics startup.

The round, a Series B, was led by Warburg Pincus, with participation from other shareholders including Volcanics Venture and Vertex Ventures. The company is not disclosing its valuation but we have asked and will update as we learn more. Warburg Pincus led the startup’s previous round of $60 million in 2017, and Geek Plus has raised around $217 million since being founded in 2015.

Part of the reason for this large round is because the company says its on track for a big year, projecting to growth business five-fold, and it wants to capitalise on that growth both inside its own giant home market of Mainland China as well as further afield.

To date, Geek Plus says that it has delivered more than 5,000 robots across some 100 robotics warehouse projects in China, Hong Kong, Taiwan, Japan, Australia, Singapore, Europe, and the United States. Current customers include Alibaba’s Tmall and VIP.com out of Asia.

“The investment by Warburg Pincus and other shareholders fully demonstrates their recognition of Geek Plus’s development and their confidence in Geek Plus’s future prospects,” said Yong Zheng, founder and CEO of the startup, in a statement. “We will continue to focus on empowering various industries through AI & Robotics technologies. This year, we expect to grow our business by more than five times…We will continue to be customer-centric, and create values for customers through a seamless integration of AI & Robotics technologies and customers’ supply chain needs.”

There are a number of other companies that have been delving into logistics robotics, both to improve their own logistics operations, and to build as a standalone business to be used by others. These represent competitors and potential partners, or even acquirers, to Geek Plus.

Top of the list is perhaps Amazon, which acquired robotics startup Kiva for $775 million in 2012 to build out its warehouse robots. Since then, it has expanded its robotics operations into a wider unit that, in the grand tradition of other services like AWS and fulfilment, may well productise its robots to fill the needs of other companies that want to inject some AI and robots into their own warehouse operations.

InVia and Fetch, meanwhile, are two companies busy building out technology to sell to third parties from the start, respectively robotics-as-a-service and robots themselves.

Given that some of these robots are also making their way out of the warehouse and into last-mile delivery scenarios, one estimate now puts the value of the wider market at $10 billion.

Geek Plus has been building products to date that cover a range of scenarios where you might use a robot: they include “cargo-to-man” picking systems, sorting and movement systems, and unmanned forklifts.

“Since our first investment in Geek+ last year, we have been very impressed with Geek+’s rapid growth, especially in business expansion and internationalization,” Jericho Zhang, executive director of Warburg Pincus, said in a statement. “Technology is revolutionizing supply chain. Geek+ is one of the leading technology companies that is able to combine robotics, big data, AI and other cutting-edge technologies to solve the pain points of the traditional supply chain. As it accumulates more data, and continues to optimize algorithms and expand into other industries, we are confident that Geek+ will continue to lead the revolution and innovation in the space.”