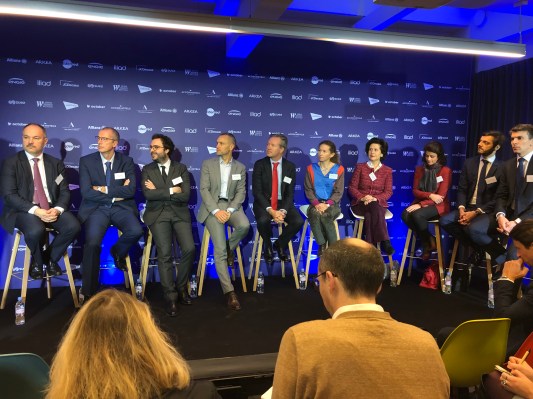 11 big companies are borrowing €100,000 each on October at a 2.5 percent interest rate. October users will be able to lend as little as €20 to one of these companies.

If you look at the list of companies, all those names will sound familiar to French readers and beyond. Most of them are public companies, most of them are originally from France — AccorHotels, Adecco Group, Allianz France, Arkéa, Edenred, Engie, Iliad, JCDecaux, Suez, Unibail-Rodamco-Westfield and Webhelp.

According to October, annual revenue of those companies ranges from €1.8 billion to €122 billion, with Allianz generating more revenue than anyone else.

At a press conference, October co-founder and CEO Olivier Goy explained the idea behind this project. Those credit lines won’t change anything for big public companies. But many of those companies work with small and medium companies.

Today’s partners will be able to refer small companies. October will wave the application fees for those companies up to €11 million in loans.

Thanks to this vote of confidence, you could imagine small companies applying to October because a big company they trust has done it before.

One of October’s key advantages compared to borrowing money from the bank is that it’s much faster. You can apply to a credit line and get an answer just a few days later. This is quite useful if you need to move quickly to launch a new product, open a new office and more.

October currently operates in France, Spain, Italy and soon the Netherlands. I already covered the company in depth back in June if you want to read more.