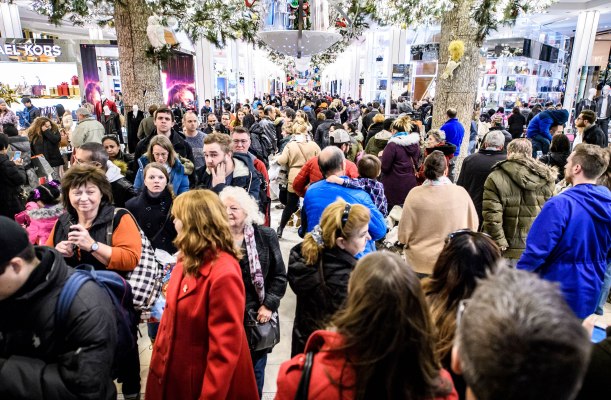 After a record-breaking Thanksgiving with $3.7 billion in digital sales across desktop and mobile devices, it looks like Black Friday will also pull in a bumper year for e-commerce. Adobe — which tracks trillions of transactions across a range of retail sites — says that as of 7am Pacific Time, there has already been $643 million spent online.

That’s not only a rise on yesterday’s sales at this point in the day — when Adobe had recorded $406 million — but a rise of some 28.3 percent on the same period a year ago. For the full day last year, shoppers spent $5.03 billion online, a record at the time; Adobe is currently predicting that this year there will be $6.4 billion spent on Black Friday, revising up its figures based on strong morning demand.

As with Thanksgiving and the overall trends of more smartphone shopping, we’re seeing an ongoing shift to more shopping on mobile devices — specifically smartphones. That’s partly because phones always improving with more functionality and bigger screens, but also because e-commerce technology has improved to make the mobile shopping experience faster and easier.

“Mobile shopping continues to skyrocket and see increased conversion,” Schreiner said. “Retailers understand that shopping and buying on smartphones is now the norm for consumers, and as a result are delivering better experiences and optimization on mobile devices.”

Adobe hasn’t released figures yet for conversion rates on Black Friday, but yesterday desktop was still seeing a higher rate of people who would buy after browsing: five percent on desktop versus around three percent for smartphones.

And while tablets are not nearly as popular for people to use — they account for only around eight percent of traffic and purchases — conversion rates on these are essentially on par with desktop.

At the smaller-retailer end of the scale, things are also doing well. Shopify, which provides a real-time sales visualisation for some 600,000 merchants on its platform — typically smaller retailers than the 80 biggest tracked by Adobe — notes that at the moment the average sales per minute for those merchants is currently hovering at around $650,000 per minute, a rise on earlier today.

Black Friday — once the traditional ‘start’ of the holiday sales period — has downshifted somewhat in importance as retailers have brought up their seasonal promotions earlier and earlier, tapping into a key aspect of e-commerce: shopping anytime you please, not just when a store is open.

At the same time, while Thanksgiving brings online retailers a captive audience — physical stores are mostly closed — Black Friday really sees the two going head-to-head, with the added competitive twist that people get days off after Thanksgiving and use them to take to the stores.

The competitiveness at physical stores has had a dark undercurrent, too, with pictures of crazed shoppers trampling over others to get to the best bargains an annual theme in the media.

Interestingly, Adobe notes that there has been a sharp rise in “buy online, pick up in store” transactions, with people buying twice as much on Thursday as on Wednesday to pick up starting Friday. That might go some way to alleviating some of the heated moments in shops.

Adobe says that so far this month, there has been $38 billion spent online, up 18.5 percent on a year ago.

We’ll update this post more with data as we get it.