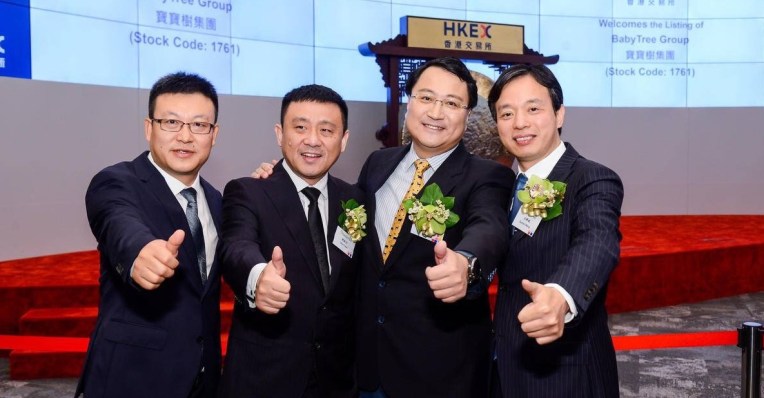 A lot of Chinese millennials may be delaying or opting out of childbearing, but those who have committed to parenting often go all out to ensure their children grow up healthy and do well in school.

One company capitalizing on China’s booming mother and infant industry – which is expected to double in market valuation between 2015 and 2018 to top $520 billion, according to consulting firm Roland Berger – is Babytree. The Beijing-based firm started trading on the Hong Kong Stock Exchange on Tuesday.

The firm debuted at HK$6.91, or $0.88, compared to its IPO price of HK$6.80. That values Babytree at HK$11.5 billion, or $1.47 billion, well below its May valuation of $2.19 billion after it inked a strategic investment from Alibaba that saw the partners collaborating on multiple fronts, including ecommerce, advertising, and paid content.

Babytree, in which Alibaba owns a 9.9 percent stake, was started in 2007 by venture capitalist Shao Yibo – who founded Matrix Partners’ China subsidiary and EachNet, which Ebay bought out in 2003 to take on Alibaba’s Taobao – and former Yahoo and Google executive Wang Huainan.

Babytree’s other major investor is Chinese conglomerate and investment firm Fosun International, which has also backed its smaller competitor Qinbaboao, a social media service for young parents to share photos and knowledge.

The parenting portal reached an average of 175 million monthly active users between July and September, according to its IPO prospectus. Qinbaobao claimed to have more than 70 million registered users when it raised hundreds of millions of RMB in a series C funding round in October.

Babytree generates most of its revenues from advertising fees and ecommerce transactions, but Wang the co-founder said recently that paid content is one of the company’s fastest-growing segment. The parenting site posted revenues of 408 million yuan, or $58.6 million, in the first half of 2018, up 12 percent from the same period a year ago. Its adjusted profit increased by 30 percent to 122 million yuan, or $17.6 million, during the same period.

Stripe eyes an exit, Dell bets on the cloud, and Shutterstock embraces generative AI
Are you in control of your personal data? – Week in security with Tony Anscombe
ISC Releases Security Patches for New BIND DNS Software Vulnerabilities
10 best cybersecurity podcasts to check out
EDR tools for Windows Server compared