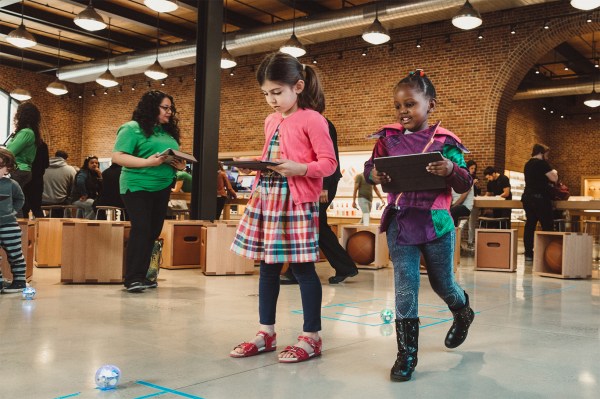 Apple today opened registration for thousands of free “Hour of Code” sessions taking place at its Apple Store locations around the world from December 1st through the 14th. The sessions are one of several programs the company has underway focused on helping more people learn to code both inside and outside the classroom.

For the sixth year, Apple says it will host daily Hour of Code sessions through “Today at Apple.” These take place during the first two weeks of December and will focus on teaching aspiring coders core concepts. For those ages 6 to 12, the sessions will involve coding with robots, while attendees 12 and up will use the educational app Swift Playgrounds to learn coding basics.

The company created an Hour of Code Facilitator Guide that helps educators host sessions where students learn to use Swift Playgrounds along with other iPad apps.

Related to this, Apple also introduced a new Swift Coding Club kit for teachers and students that provides the materials needed for them to start their own coding clubs at school.

This kit is designed for students ages 8 and up, and will see them collaborating, prototyping and learning about how to code an app.

The Swift Playgrounds educational app, launched just over two years ago, is today available in 15 languages, including English, German, French, Spanish, Italian, Chinese and Japanese, Apple noted. The app has been expanded since launch to include more courses, like those for programming toy robots or building apps that use AR, for example.

Now, Apple is turning mastery of the app into an AP (Advanced Placement) high school course, too.

The company says it will launch a free AP Computer Science Principles course syllabus and curriculum for the next school year, which will give students the chance to earn AP credit for learning to code in Swift. Students will also be able to take a certification exam — the App Development with Swift Level 1 exam — following their completion of the class. These will be held by Certiport Authorized Testing Centers worldwide, and will test students’ knowledge of Swift, app developer tools and core components of apps.

Swift Playgrounds has been a significant part of Apple’s educational efforts over the past couple of years. In 2016, the company launched Everyone Can Code, which teaches coding to students from kindergarten to college and beyond. That program is now running at more than 5,000 schools and colleges worldwide, says Apple.