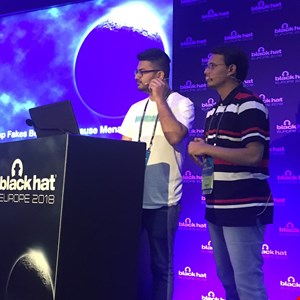 “This is happening now,” said Thaware. “As AI has progressed, if it has been trained well with sufficient sources, it can create seemingly real fake and deceptive videos.”

Deep Fakes can be created to target people of interest and importance, but also the general public, he added.

“The videos are created in such a manner that they can fool the human eye and a human can easily get tricked and believe what they see, or believe what the threat actor wants them to believe,” Thaware said.

In terms of the various hazards of Deep Fakes, they include:

“The presence of Deep Fake videos on the internet can skyrocket at any time, therefore we need to make technology that has the ability to scan the content that we upload on social media, and flag it or block it,” he added.

To conclude, Thaware’s advice for curbing the rise of the Deep Fake threat was:

Also, both speakers urged the security community to come forward and create an awareness that Deep Fakes exist in the world, and do it all it can to create as many hurdles possible to stop malicious actors creating Deep Fake videos.