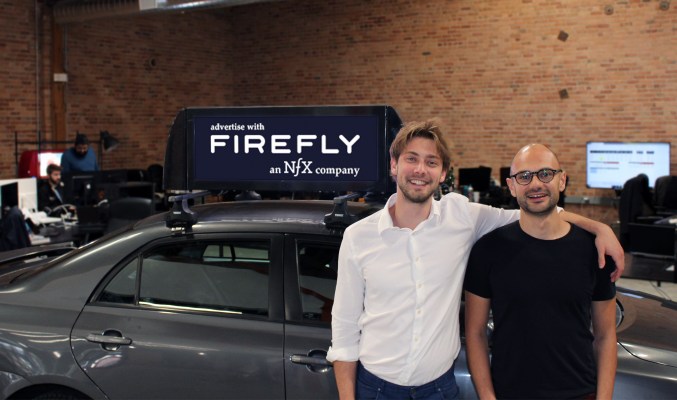 Firefly, a startup that allows rideshare drivers to make money through digital advertising, is officially launching today. It’s also announced that it has raised $21.5 million in seed funding.

The idea of sticking advertising on a cab isn’t new, but Firefly offers drivers what it calls a “digital smart screen,” allowing advertisers to run targeted, geofenced campaigns. The company has apparently run more than 50 ad campaigns already, during a beta testing period in San Francisco and Los Angeles, with hundreds of cars on the road.

“Being the first at building out the IP is going to be the main differentiator,” said co-founder and CEO Kaan Gunay. “Over half our team are engineers, and we have been extremely focused on developing core IP to make sure it’s scalable.”

In addition, Gunay said that thanks to the combination of Firefly’s targeting capabilities with its “strict” advertising policies (it won’t accept ads for strip clubs, tobacco and cannabis companies, among others), “We’re working with a lot of advertisers who might not even have advertised outdoors before. We believe we are expanding the market.”

One of the main goals is to allow drivers for Uber, Lyft and other ridehailing services to make more money. In fact, Firefly says the average driver in its network makes an additional $300 per month. 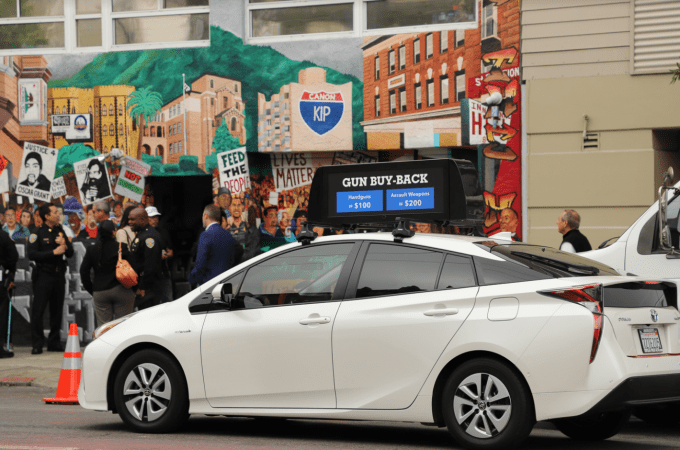 Gunay explained that if the driver meets a certain threshold for hours on the road, the company will pay them a flat fee to carry its advertising — but he also said the company is exploring different ways to “maximize the revenue that we share with the drivers and give the maximum benefit to the drivers.”

Earlier this year, Uber partnered with a startup called Cargo to allow drivers to make additional income by selling goods like gum, snacks and phone chargers. Firefly doesn’t have an official relationship with the ridehailing companies, but Gunay said, “In our conversations with these large companies … they’ve said the drivers are free to do what they want to do. This is why it’s a win for everyone.”

Gunay also said these displays will become the foundation for a “smart city data network.” In other words, they will collect data that Firefly plans to share with local governments and nonprofit groups. For example, he said the company has already been sharing air quality data with the Coalition for Clean Air, and it’s also looking to include temperature sensors and accelerometers.

Apparently, Gunay doesn’t plan to make money from this side of the business. He told me, “We want to be able to add value to how cities operate … We’re not planning to monetize that.”

Getting back to the funding, $21.5 million is a huge seed round, but Gunay said the company’s success thus far was able to”justify a larger raise and a higher valuation.” The round was led by NfX, Pelion Venture Partners, Decent Capital (founded by Tencent’s Jason Zeng) and Jeffrey Housenbold of SoftBank Vision Fund (yes, that SoftBank Vision Fund).