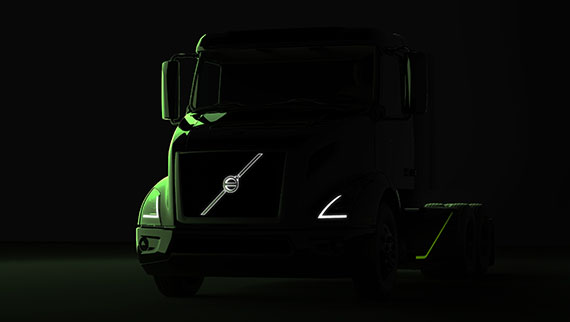 Volvo Trucks released teaser images Wednesday of the electric trucks it plans to bring to California next year as part of a demonstration project, the latest truck manufacturer to publicize its electric plans in the state.

The attraction to California is no accident. The state has set aggressive targets to improve air quality and reduce carbon emissions, particularly those generated from tailpipes.

Daimler Trucks North America said in July it would begin testing 20 fully electric heavy- and medium-duty Freightliner models at the ports of Los Angeles and Long Beach this year. Tesla, which unveiled the Tesla Semi prototype in November 2017 , began testing its prototype semis in California and Nevada earlier this year. Tesla CEO Elon Musk has said production of the Tesla Semi, a Class 8 heavy duty truck, would begin in 2019.

Newcomer Thor Trucks is developing a medium-duty Class-6 electric truck for UPS, which will also be tested in California.

Volvo Trucks plans to test its new electric VNR truck, a refitted version of its diesel-powered VNR model. The electric VNR, which will be based on powertrain technology used in the Volvo FE Electric, will be produced for the North American commercial vehicle market starting in 2020, the company said.

The California Air Resources Board preliminary awarded $44.8 million to SCAQMD for the Volvo LIGHTS project. The LIGHTS project will focus on distribution, regional-haul and drayage operations.

The goal, according to Volvo Trucks North America President Peter Voorhoeve, is test and showcase their approach to electrifying the freight transport industry. The project will ultimately result in the commercialization of fully-electric heavy-duty trucks, Voorhoeve added.

“Electric trucks bring many unknowns and our holistic focus through the LIGHTS project will help our fleet partners transition securely and smoothly based on their individual needs regarding driving cycles, load capacity, uptime, range and other parameters,”Johan Agebrand, Volvo Trucks North America director of product marketing said in a statement. “Within the project we’ll look at everything from route analysis and battery optimization to servicing and financing. We always aim to offer high uptime and productivity.”

Startups, here’s how you can make hardware without ruining the planet
India orders Vodafone Idea to convert government dues into $2 billion equity
Is that survey real or fake? How to spot a survey scam
Legacy VMware Bug Exploited in Global Ransomware Campaign
Some Salesforce employees just found out they’re part of the 10% layoff announced last month