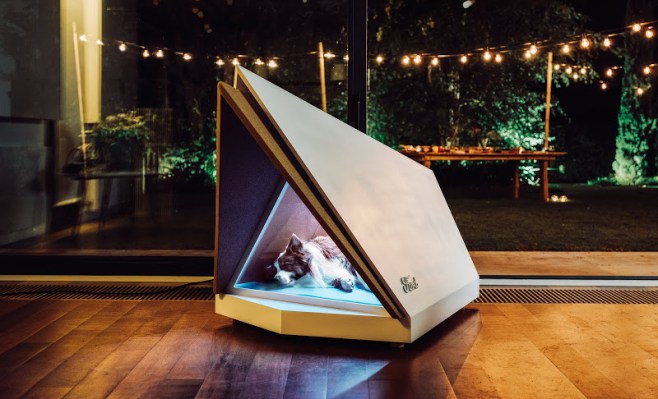 Dogs have a much wider range of hearing than humans do and noises that don’t bother us can give them a very ruff time. Fireworks are especially tough on many pups and also hard on owners who have to calm their panicking pets. To potentially help them, Ford has developed a noise-cancelling kennel prototype that it says was inspired by the noise control technology introduced used in its Edge SUV to soften engine and transmission noises.

When microphones inside the kennel detect the sound of fireworks, a built-in audio system sends out opposing frequencies that Ford claims significantly reduces or cancels the cacophony. The kennel is also built with high-density cork to further mute outside noises.

The noise-cancelling kennel is not currently for sale, but Ford says it “is the first in a series of initiatives—called interventions—that applies automotive know-how to help solve everyday problems.”

You might remember, especially if you have a small child, that last year Ford developed a cot called Max Motor Dreams to calm babies who only fall asleep in moving vehicles, a situation many exhausted parents (with high-mileage cars) are familiar with. The cot had small motors underneath that stimulated the feel of a moving vehicle, played actual road noise and even had built-in LED lighting to mimic the glow of streetlights.

At the time, Ford said the cot might be produced for sale if there was enough interest, but even though it went viral, Max Motor Dreams never did make it to the market. That’s not an encouraging sign for people who want to buy the noise-cancelling kennel, but in the meantime, here are some ways you can prepare your dogs for holiday fireworks. There is also a product called the ThunderShirt that is supposed to help alleviate anxiety in dogs, but of course results will vary from canine to canine.