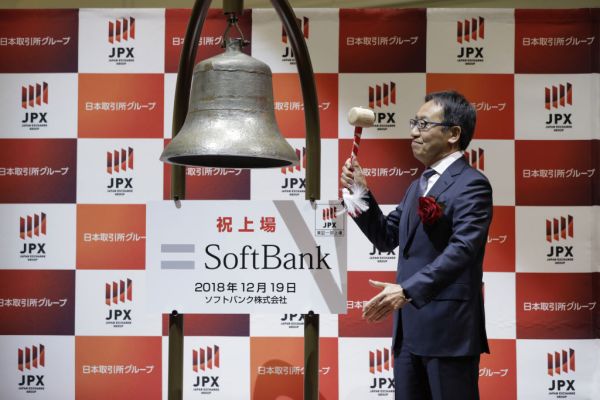 SoftBank Corp’s initial public offering today started with a bang before trailing off into a whimper, with the stock falling 14.5 percent during its first day of trading on the Tokyo Stock Exchange.

The company is the mobile unit of conglomerate SoftBank Group, whose holdings also include Sprint and the $100 billion Vision Fund.

Shares of SoftBank Corp opened at 1,463 yen, below the 1,500 yen the company had set for its IPO price (instead of a range), and closed at 1,282 yen. It offered 160 million shares, or about a third of the total held by parent company SoftBank Group. Despite a bumpy first day of trading, SoftBank Corp raised a total of 2.65 trillion yen (about $23.5 billion), making it Japan’s largest ever IPO and placing it just behind Alibaba’s record-setting $25 billion debut on the New York Stock Exchange in 2014 (SoftBank Group is one of Alibaba’s largest shareholders).

According to Bloomberg, 90 percent of the investors who bought SoftBank Corp shares at the 1,500 opening price were individuals, who the company had targeted in an unusual marketing campaign.

Factors that may have dampened investor enthusiasm about include a network outage earlier this month triggered by a shutdown of Ericsson equipment due to expired software certificates (O2 customers in Great Britain were also affected).

The outage underscored other concerns about SoftBank Corp’s telecommunications infrastructure. According to a Nikkei report published last week, the company has decided to stop using hardware from Huawei Technologies due to security concerns and replace them over the next several years with equipment by Ericsson and Nokia.

While the company says the hardware swap isn’t expected to cost a lot of money, it will also need to deal with more competition next year. SoftBank Corp’s rivals are currently NTT DoCoMo and KDDI, but Rakuten will launch cellular service in October 2019, making it Japan’s fourth mobile network operator.

Furthermore, SoftBank Group also carries massive debt that totaled 18 trillion yen (about $160 billion) as of the end of September, more than six times the amount it earns on an operating basis. This means the Vision Fund is especially reliant on Saudi Arabia’s sovereign fund, which contributed $48 billion, making it the fund’s largest investor.

Saudi Arabia’s sovereign fund, called the Public Investment Fund, is run by Saudi Crown Prince Mohammed bin Salman, who has been implicated by Turkish officials and the United State’s Central Intelligence Agency in the planning of journalist Jamal Khashoggi’s murder. Crown Prince bin Salman has denied involvement in the killing, but the situation still calls into question the future of Saudi Arabia’s involvement with SoftBank, especially since Crown Prince bin Salman said in October that Saudi Arabia plans to invest another $45 billion in the second Vision Fund.

Jumia’s investors rethink their stakes — for better and worse
Gootkit Malware Continues to Evolve with New Components and Obfuscations
Why your data is more valuable than you may realize
Mastodon vs. Twitter: Know the differences
10 best cybersecurity podcasts to check out