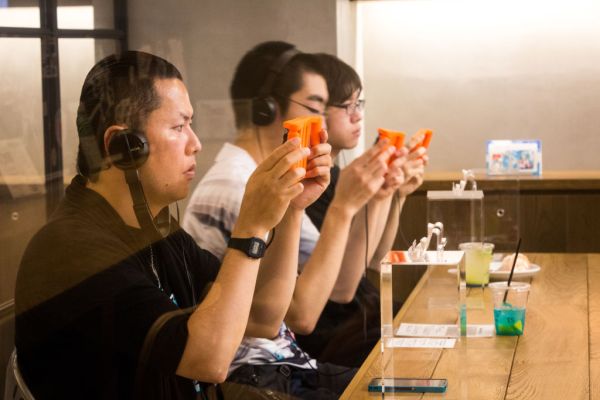 People in China have a host of reasons not to go outdoors these days. They may be too busy to leave their office, wary of air pollution or have chosen to live isolated lives. Among them is an expanding young consumer base who prefers to dwell in the virtual world of video games, animes and comics over the tangible reality. More important, there’s an endless list of startups pandering to their impulse to stay indoors with services from online shopping to food delivery.

Two Chinese internet giants are chasing after this indoorsy crowd. Last week, food delivery giant Ele.me announced that it’s teamed up with youth entertainment site Bilibili on a one-off joint membership that will further keep young consumers at their desk.

Ele.me, which means “are you hungry?” in Chinese, was sold to ecommerce behemoth Alibaba in April. Bilibili, which went public in the U.S. this year, started as a video streaming service focused on animes and has evolved into a one-stop destination for all things related to youth cultures: Animes, comics, cosplay, video games and other niches that you and I may fail to name.

Their marriage gives subscribers the best of both worlds: Unlimited streaming of animes and deep discounts on food delivery orders. Bilibili has been doubling down on content investments in recent months, which saw it agree to buy out most of the comics assets of Netease, one of China’s largest internet companies. What’s better than binging on one’s favorite anime series and not having to leave home when the stomach growls? (Whether this is a healthy lifestyle is another topic.)

The promotion, which runs from December 23 to December 30, allows people to purchase the memberships of Bilibili and Ele.me at 25 yuan, or $3.63, a month. That’s a 15 yuan discount from what users would have to pay were they to subscribe to the two services separately. The rationality behind the tie-up is an overlapping Generation Z user base. By 2017, about 82 percent of Bilibili’s users are 8 to 28 years old, according to a report by QuestMobile. Meanwhile, more than 60 percent of the users who order food online in China are under 24 years old.

China’s food delivery market is set to top 243 billion yuan, or $35 billion, by the end of 2018, according to iiMedia. By then, China will have 355 million users of food delivery apps — or about 40 percent of its national population. Five years ago, there were just over 100 million users for this market.

The boom has jacked up the price tags of market leaders Ele.me, which was valued at $9.5 billion in the Alibaba deal, and Tencent-backed Meituan Dianping, which had a spectacular initial public offering in Hong Kong in September.

Alibaba and Bilibili call their joint membership “Zhai E Kuai,” a wordplay on “be otaku together.” The Japanese word “otaku” originally means “someone else’s venerable home” and later took on a new life to describe someone who is so obsessed with a subject or hobby to the point of not leaving home. Bilibili’s core users are often stereotypically described as otakus of animes or video games, though certainly not all of them shun the outside world.

Aside from Bilibili, Alibaba has also been pally with Starbucks as the two began integrating their rewards systems.