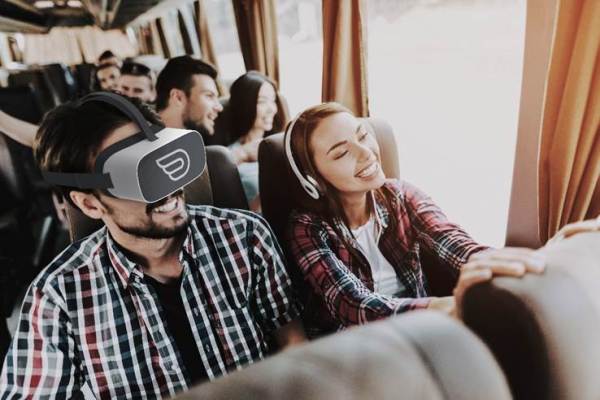 FlixBus, the low-cost tech-forward bus service out of Europe that launched in U.S. this year, has added a VR experience to some long-distance routes to and from Las Vegas.

For now, the FlixBus VR feature, which includes about 50 virtual reality games and travel experiences, is limited to routes from Tucson, Phoenix, Los Angeles and San Diego. And it will run for three months.

Travelers who reserve a panoramic seat on these routes will get the VR experience for free. Once on board, passengers will receive VR headset loaded with content.

The Pico Goblin 2 headsets are from Pico Interactive. Inflight VR provides the content and software updates of the VR platform. Inflight VR has experience with offering a platform to people who are traveling. The company already provides the platform for airlines and airport lounges.

If the VR feature is received well — meaning people use it, enjoy it, and don’t have ill effects like vertigo — it could stick around longer. A company spokesperson told TechCrunch that the VR experience was tested on bus routes in Spain and France and received positive feedback from customers. Flixbus also picked routes that tend to be straight and without a lot of winding roads to reduce the risk of a bad experience with the VR feature.

This VR experiment matches the company’s tech-forward and youthful approach to bus travel.

FlixBus competes with traditional bus company Greyhound with fares between U.S. cities as low as $4.99. However, it has a different business model that is more comparable to ride-hailing company Uber. FlixBus, which now operates in 28 countries, manages the ticketing, customer service, network planning, marketing and sale of its product. The driving is left to local partners, which get to keep a percentage of the ticket receipts.

These local bus partners manage the daily operations of the brightly painted FlixBuses, which are outfitted with free Wi-Fi, power outlets at every seat and complimentary onboard entertainment portal. The company launched in the U.S. in May, starting with routes across California, Arizona and Nevada.