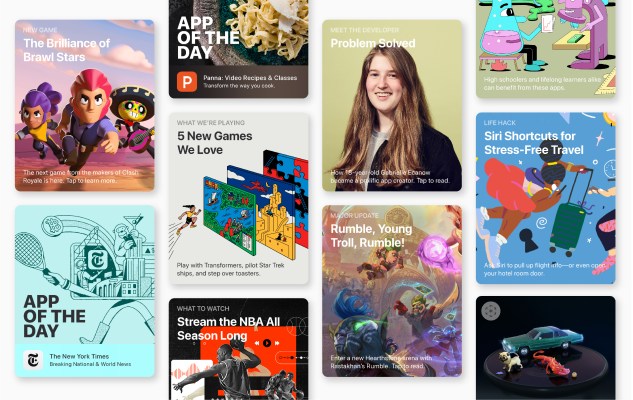 Apple today is sharing some good news in the wake of yesterday’s reveal of a significant, market-moving cut to its revenue forecast, attributed to declining iPhone sales in China’s slowing economy. The company says its App Store, at least, was having a good holiday. This year, customers spent $1.22 billion during the 2018 holiday season and broke a new single-day record on New Year’s Day.

The $1.22 billion in App Store spending occurred between Christmas Eve and New Year’s Eve, Apple said. This is typically the peak season for App Store consumer spend, as customers load up new iPhones and iPads with apps, and use their App Store Gift Cards to buy paid apps and games.

Over the holidays, games and self-care apps were the most popular categories, with Fortnite and PUBG among the most downloaded games, along with Brawl Stars, Asphalt 9 and Monster Strike, Apple said.

Meanwhile, as the New Year kicks off, customers are now turning to health and fitness apps, educational apps, and productivity apps – likely to some extent inspired by their New Year’s Resolutions. The apps leading these categories include 1Password, Sweat, and Luminosity.

Last year, Apple had also announced a record-breaking holiday season, with $890 million spent during the week of Christmas Eve and $300 milion on New Year’s Day 2018.

Apple CEO Tim Cook, in his letter yesterday, signaled that the App Store remains one of the bright spots in the company’s “Services” category, even as he delivered the crushing news of a slowdown in iPhone sales.

The company said it is now expecting $84 billion in the quarter that ended Saturday, down from its earlier estimate of $89 billion to $93 billion. However, “Services” generated over $10.8 billion in revenue during the quarter, with each geography hitting a new quarterly record. The company noted, too, it’s still on track to achieve its goal of doubling the size of this business from 2016 to 2020.

A record-breaking end of the year for the App Store shouldn’t come as a surprise, given that the overall app economy is continuing to grow, with mobile games still driving revenues and the subscription app business also making gains. App Annie recently predicted app stores will surpass $122 billion globally in 2019, including the App Store, Google Play, and third-party Android app stores in China, combined.

Prior to Apple’s report, app store intelligence firm Sensor Tower had last week noted that the U.S. App Store broke spending records on Christmas, with a record of $54 million on that day alone – up 31 percent over the year before. It had also passed the $52 million spent on Black Friday 2018, the firm said.

Apple typically releases an App Store holiday report at this time of the year, so its release today isn’t necessarily an attempt to create good press a time when its stock is crashing. But given Apple’s usual attempts at spin, it may be seen that way.