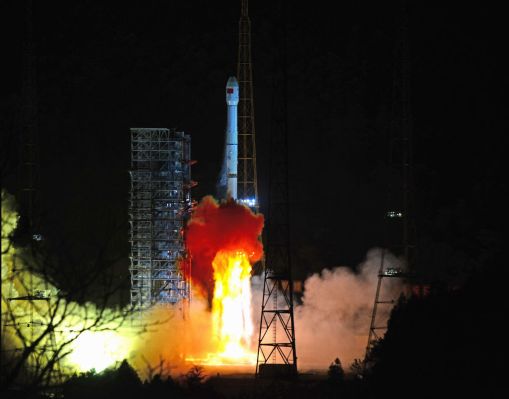 It’s not Lunar New Year yet, but there is something new on the moon. In a major milestone for space exploration, China announced that its lunar program has successfully soft-landed a probe on the far side of the moon, making it the first one to do so. The historic landing was reported by Xinhua, China’s official news agency, earlier today.

According to the China National Space Administration, the probe, consisting of a lander and rover, touched down at about 10:26AM Beijing time. This is the first ever soft-landing (meaning a landing without damage or destruction to the space vehicle) on the far side of the moon, which is never visible from Earth. Named after the Chinese moon goddess, Chang’e-4 launched on Dec. 8 from the Xichang Satellite Launch Center in Sichuan province.

The South China Morning Post reported earlier this week that the Chang’e-4 will be used for “astronomical observation using low-frequency radio, surveying the terrain and landforms, detecting the mineral composition and shallow lunar surface structure, and measuring neutron radiation and neutral atoms.” The successful soft-landing is important for space exploration because there is relatively little information about the far side of the moon compared to the side visible from Earth, which has been explored and surveyed by previous missions.

Photographs taken by earlier spacecraft, including the Soviet Union’s Luna 3 and Zond 3 (launched in 1959 and 1965, respectively) and NASA’s Lunar Orbiter program (launched in 1966), found significant differences between the far side’s terrain and the surface of the moon visible from Earth. In 1962, NASA’s Ranger 4 probe became the first spacecraft to impact on the moon, but was unable to send back data after landing.

Since direct communication between Chang’e-4 and Earth is blocked because of the probe’s position, China also launched a relay satellite called Queqiao, or Magpie Bridge, that is currently 400,000 km above Earth, positioned between it and the moon.

Chang’e-4’s successful landing concludes the second phase of the Chinese Lunar Exploration Program (CLEP). The first phase was the launch of Yutu, the lunar rover of Chang’e-3, which landed on the moon in December 2013, but stopped moving after 40 days due to a mechanical problem (it is still able to transmit data and photos, including true color high-definition photos). The successful landing of Chang’e-3 was another a significant milestone for China’s space program, making it only the third country after the U.S. and Soviet Union to soft-land on the moon. After Chang’e-4, the third and final phase of CLEP will be a returnable spacecraft called Chang’e-5. Set to launch by 2020, Chang’e-5 will be used to collect samples.