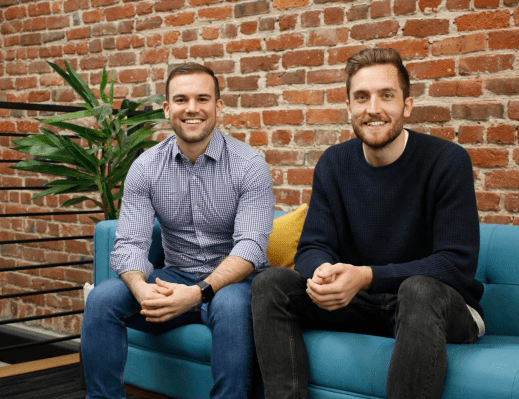 Sapling, a three-year-old, San Francisco-based company whose employee management and onboarding software is being adopted by a small but growing number of mid-size companies with far-flung workforces, is announcing today that it has raised $4 million in funding from Gradient Ventures, which is Google’s AI fund, and Tuesday Capital, formerly known as CrunchFund.

It quietly secured the funding several months ago and has been using it to ramp up to the 50 people it currently employs.

The company’s founding team is the kind that investors like to see, meaning that in many ways, their previous work experiences led them to start Sapling.

Cofounder and CEO Bart Macdonald has spent his entire career in HR, working most recently in Melbourne, Australia, as a regional director for the global coding school General Assembly, where he hired and managed a 10-person marketing, sales and operations team.

Meanwhile, cofounder Andy Crebar (born in the same Sydney hospital as Macdonald, a day later) also knows the plight of individuals trying to seamlessly onboard new hires, having worked most recently on business development initiatives at a fintech startup called Credible Labs where adding headcount was, as at many companies, a point of frustration.

“I liked that Bart and Andy had lived through their own experiences dealing with crappy HR software in previous positions and thus really understood how customers view the problem,” says Tuesday Capital cofounder Pat Gallagher.  “The fact that neither are technical would have been an issue if we were investing pre product, but by the time we invested, they had proven they could build software that their customers loved.”

In fact, says Gallagher, his team was drawn to Sapling specifically because a handful of the firm’s portfolio companies has been using its onboarding software and “really raving about it.  It’s hard to find HR software that people really like, so that was a big positive for us and helped cut through the noise of the space that they operate in.”

So what’s so special about Sapling? Mostly, it seems, its approach brings together the tools and software that HR execs are already using, including ADP for payroll, or G Suite for productivity, and Lever for recruiting, integrations that also employ a heavy dose of AI to anticipate the behaviors of employees, making it easier for managers to recruit, aid, manage and support current and future staffers.

As Macdonald explains it on the simplest level, Sapling not only provisions software for them but it connects their tools “so they don’t have to  open 10 tabs. All they have to do is run their workflow inside of Sapling so that, for example, an employee can ask for time off in Slack,” and that request will automatically be reflected in the employer’s payroll and benefits systems (once approved).

Sapling currently works with companies with anywhere from 100 to 1,500 employees, including InVision, an eight-year-old commercial platform used by design teams to create digital products for mobile and desktop that is currently investing its Series F round. InVision, which has a large distributed workforce, says Sapling has saved the company 1,000 hours by speeding up communications and making employee engagement far more seamless.

What comes next for Sapling remains to be seen. It’s in an awfully crowded category, with no shortage of all-in-one HR solutions attracting venture capital. In the meantime, with low unemployment to contend with, Sapling is smartly positioning itself as an important tool in specifically helping companies with geographically distributed teams to retain and engage employees — and customers like Invision, along with Digital Ocean, KPMG, and Kayak say it’s working.

Above, left to right: founders Bart Macdonald and Andy Crebar, courtesy of Sapling.