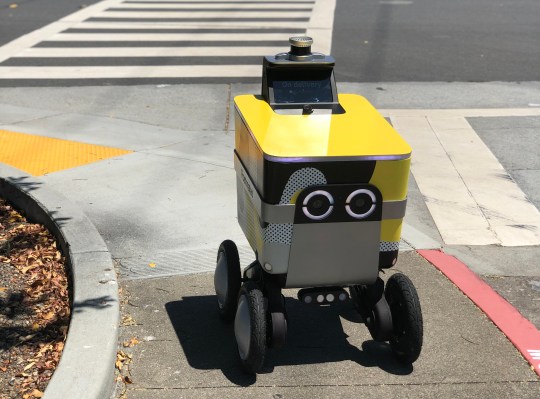 Postmates has officially received the green light from the city of San Francisco to begin testing its Serve wheeled delivery robot on city streets, as first reported by the SF Chronicle and confirmed with Postmates by TechCrunch. The on-demand delivery company told us last week that it expected the issuance of the permit to come through shortly after a conditional approval, and that’s exactly what happened on Wednesday thes week.

The permit doesn’t cover the entire city – just a designated area of a number of blocks in and around Potrero Hill and the Inner Mission, but it will allow Postmates to begin testing up to three autonomous delivery robots at once, at speeds of up to 3 mph. Deliveries can only take place between 8 AM and 6:30 PM on weekdays, and a human has to be on hand within 30 feet of the vehicles while they’re operating at all times. Still, it’s a start, and green light for a city regulatory environment that has had a somewhat rocky start with some less collaborative early pilots from other companies.

Autonomous delivery bot company Marble also has a permit application pending with the city’s Public Works department, and will look to test its own four-wheeled, sensor-equipped rolling delivery bots within the city soon should it be granted similar testing approval.

Postmates first revealed Serve last December, taking a more anthropomorphic approach to the vehicle’s overall design. Like many short-distance delivery robots of its ilk, it includes a lockable cargo container and screen-based user interface for eventual autonomous deliveries to customers. The competitive field for autonomous rolling delivery bots is growing continuously, with companies like Starship Technologies, Amazon and many more throwing their hats in the ring.