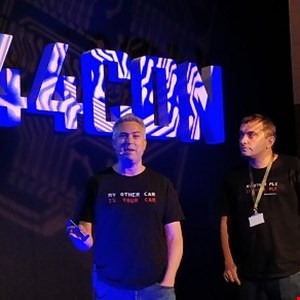 Gee said that there is demand for GPS trackers, which are used in watches for kids, cars and even on pets’ collars, but their research had found consistent API vulnerabilities. Gee said that the problems were in “a lot of common APIs and used across platforms” in IoT products that were available cheaply.

Stykas called one product range “a monstrosity,” saying that the research into Thinkrace technology found that most API calls did not require authentication, and all users start with the default password “123456.” There were at least 370 vulnerable devices, across 80 domains on 40 different servers, which Stykas said allows anyone to be tracked, with a hacker able to change the email and take over the device, and force a firmware update.

Calling it a “classic horizontal escalation of privilege,” Stykas said that the vendor had not responded to vulnerability disclosures for three years “on multiple attempts.”

In further research, Gee said that a lot of the GPS devices, particularly tracker watches for kids, used a pay-as-you-go SIM card, and allowed for a premium rate phone line to be called. “If we own the number, we make the money,” he said, pointing out that the costs of setting up a number only runs into hundreds of pounds, but regulation by the PSA was strong on doing this.

Looking at the options of hacking a GPS tracker to enable text voting to a premium line, Gee said that a typical SMS vote is 35p, so with a £10 top up you could vote 28 times. If there are 25 million vulnerable devices, that can enable seven billion votes. While he admitted that the voting at the annual Eurovision song contest could not be influenced because of the jury system, it was possible to influence talent shows like X Factor and Britain’s Got Talent. This would also allow the attacker to gamble on who the winner would be.

Talking on the disclosure, Gee said that the UK’s main four providers (o2, Vodafone, EE and 3) have a default “on” for premium lines to be called. Meanwhile, the vendors have been notified but “most products are not fixed and multiple devices have the same flaws.” However, the PSA have responded and said that Pen Test Partners will be invited to review changes.

Gee concluded by saying that most trackers will not be fixed, but manufacturers “need to get better” as “authentication is not authorization.”