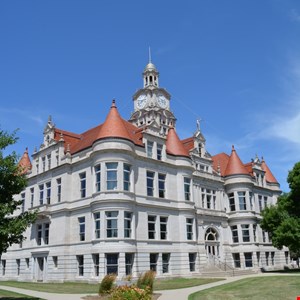 Two employees of a Colorado cybersecurity firm hired to test the security of an Iowa courthouse have been charged with burglary after allegedly breaking into the building.

Gary Edward Demercurio, 43, of Seattle, Wash., and Justin Lawson Wynn, 29, of Naples, Fla., were arrested at approximately 1 a.m. on Wednesday morning after being found inside the Dallas County Courthouse in possession of burglary tools.

Dallas County deputy sheriffs arrived at the scene after an alarm at the courthouse at 908 Court Street in Adel was tripped.

Demercurio and Wynn, who both work for global cybersecurity firm Coalfire, have been charged with third-degree burglary and possession of burglary tools.

At the time of their arrest, Demercurio and Wynn told Dallas County deputy sheriffs that “they were contracted to break into the building for Iowa courts to check the security of the building.”

In a press release issued later that day, Iowa Judicial Branch confirmed that while the state court administration had hired cybersecurity firm Coalfire to carry out security testing, the midnight shenanigans allegedly committed by Wynn and Demercurio were not exactly what it had in mind.

While the administration had asked Coalfire to test vulnerabilities in the the state’s electronic records system, it “did not intend, or anticipate, those efforts to include the forced entry into a building.”

When contacted for comment, Coalfire replied with the following statement: “Coalfire is a global cybersecurity firm that has conducted over 10,000 security assessments since 2001. We have performed hundreds of assessments for similar government agencies, and our employees work diligently to ensure our engagements are conducted with utmost integrity and in alignment with the objectives of our client.