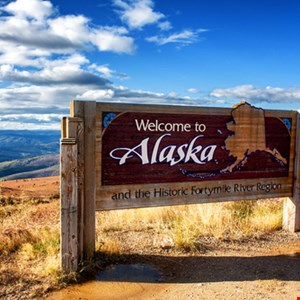 A new risk index has named Alaska as the state most vulnerable to cybercrime.

The index was created by payments platform Cardconnect using data published by the Federal Bureau of Investigation’s Crime Complaint Center.

For each crime type, the number of instances per 100,000 residents was calculated, and each state was then ranked from 1 to 50, with 50 being the riskiest. The totals were then combined to give an overall risk index figure.

Despite boasting one of the nation’s smallest populations, Alaskans face the biggest risk of falling victim to online fraud of any state in the United States. Out of a possible worst-case scenario score of 200, Alaska came in at 195 on the risk index.

Alaska accumulated 48 out of 50 points for credit card fraud and identity theft, 49 for personal data breaches, and 50 out of 50 for phishing.

At just one point behind Alaska, Nevada was found to be the second riskiest state for cybercrime, scoring 50 out of 50 for identity theft and personal data breaches and 49 out of 50 for credit card fraud.

The Silver State only managed to slink into second place by the width of an eyelash for being slightly safer when it came to phishing, scoring 45 out of 50 on the risk index for crimes of this type.

In January 2019, Alaska’s Division of Public Assistance sent letters to 87,000 people—11.7% of the state’s entire population—notifying them that personally identifiable information such as names, Social Security numbers, and healthcare details may have been accessed by cyber-attackers.

Seven months later, 650,000 Nevada students were the victim of a data breach, which resulted in the exposure of dates of birth and email addresses.

The safest state on the risk index, with an overall risk score of just 12 out of 200, was Iowa.

“There were only 53 reports of credit card fraud in Iowa, resulting in a tiny ratio of 1.68 reports for every 100,000 residents,” said a spokesperson for Cardconnect.

“This Midwestern state ranked in second place for credit card fraud, eighth place for phishing, and rated as the safest state of all for identity theft and personal data breaches.”