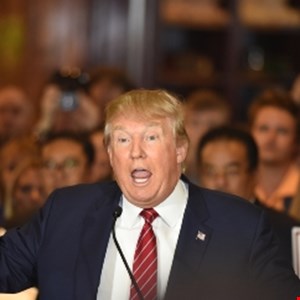 Facebook has removed advertising for Donald Trump’s re-election campaign because it featured a symbol heavily associated with Nazi Germany, in a move likely to dial-up tensions in the US.

The inverted red triangle featured in the ad was reportedly used by the Nazis to mark out political prisoners in concentration camps.

It ran alongside a message from the President claiming that ‘far-left mobs’ are causing mayhem in the US and that left-wing activists loosely labelled “antifa” should be branded a terrorist organization.

“We don’t allow symbols that represent hateful organizations or hateful ideologies unless they are put up with context or condemnation,” Facebook’s head of cybersecurity policy, Nathaniel Gleicher, said in a brief statement.

“That’s what we saw in this case with this ad, and anywhere that that symbol is used we would take the same actions.”

Other ads from the same campaign not featuring the symbol were left up, despite their dubious claims.

Although the Trump campaign claimed that the symbol was “widely used by antifa,” in reality the most common iconography used by the movement is either that of two flags, one red and one black, or three arrows pointing down. The only evidence backing-up its claims seen by Infosecurity appears to be an image produced by a German t-shirt printing company.

The social network disappointed many this week when it announced it would merely allow users to switch off social issue, electoral or political ads from candidates or political action committees in their Facebook or Instagram feeds.

This comes after a January update in which Facebook said it would help users to limit the number of political ads they see.

That isn’t good enough for the Biden election campaign. It has begun a petition calling on the social network to ban threatening behavior and lies about how to vote, and wants all political ads to be fact-checked for the two weeks running up to the election.

On the other side, Trump issued an executive order effectively preventing social media companies from fact-checking political statements.

Facebook has been at pains not to take sides in an increasingly fractious debate. In fact, it controversially left up incendiary remarks by Trump which some have claimed were an incitement to violence during recent civil unrest.