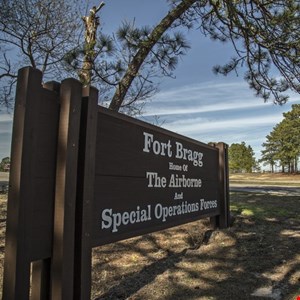 A malicious hacker has been blamed for a series of lewd messages that emanated from the social media account of a US military base on Wednesday.

Followers of Fort Bragg’s official Twitter account were surprised by the sexual content of a number of tweets that began to appear at around 4:30pm ET.

The tweets were posted in response to messages featuring adult content that were shared by another Twitter user.

When @Quinnfinite10 posted a tweet about someone who had complained about the display of pubic hair on her OnlyFans page, Fort Bragg’s account replied to her post with a message in support of the user and her decision to show her body hair.

Referencing the individual who wasn’t in favor of the image, Fort Bragg’s alleged hacker stated: “He’s lost and doesn’t know a good thing when it’s staring him in the eyes or tickling his nose in this case.”

The comment posted from @FtBraggNC read: “My face’s, then my boner’s and then my face’s again before I come up to give you a deep long kiss.”

Responding to the base’s racy messages, one Twitter user said: “Doesn’t surprise me that military bases out here advocating for pro Bush stances.”

Shortly after the lewd tweets were posted, the army base’s account appeared to be deleted.

The 18th Airborne Corps, whose commander commands Fort Bragg, then tweeted: “As many of you may know, there were a string of explicit Tweets from our account this afternoon. This was not the work of our admins. Our account was hacked.”

“We apologize to our followers. We have secured our account and [sic] looking into the matter.”

Fort Bragg spokesperson Tom McCollum told the Fayetteville Observer that the base’s account had been hacked and that an investigation into the security incident had been launched by the Army Criminal Investigation Division.

“We’ve deleted those images, reset our password and reset the two-cycle authentication process,” said McCollum. ”We apologize to anyone who follows us on Twitter and don’t know how this happened.”