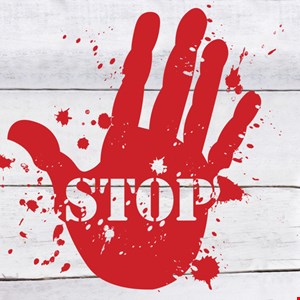 A group of artists in China has used insults hurled at women over the internet as the basis for a humungous new artwork intended to raise awareness of cyber-bullying.

The impactful piece was created by swathing an entire hillside with red banners on which 700 misogynistic comments are printed in bold white lettering.

On Weibo, the insults took up a dozen pages. In their new physical form, the hateful missives measure 3,000 meters and weigh 100 kilograms. Help to lay the banners came from a flock of volunteers.

Artists constructed the vast piece to illustrate how heavily the impact of cyber-bullying can weigh upon one individual.

Among the comments included in the piece are “F**k you feminists” and “You have to kill the devil in the crib.”

The precise location of the artwork has been kept secret, but South China Morning Post reports that the banners are enshrouding a hillside in the north of the People’s Republic.

One of the artwork’s creators, who uses the pseudonym Garlic to avoid being targeted by doxxers and cyber-bullies, said a spate of recent online bullying attacks, most of which were levied at women, had inspired the piece.

“Whenever there are discussions around gender or when women speak up about their rights, there’s always people saying the feminists are trying to create conflict,” he said.

One recent female victim of cyber-bullying who resides in Chengdu was subjected to weeks of trolling and online abuse after posting a video online.

The video showed the woman being assaulted by a man while she was dining at a hotpot restaurant. He threw hot soup over her when she asked him to stop smoking.

Cyber-bullies accused the woman of trying to cause arguments between men and women and bombarded her with comments that included “I hope you die soon” and “I’d like to spill sulphuric acid on you.”

Garlic said: “When one is hiding behind the internet typing these comments, they may not understand the harm words bring to an individual.”

He added: “Anyone can be cyber-bullied. So if we boycott cyber-bullying and help those who were bullied, we are helping ourselves.”

Colorado Passes New Privacy Act
Cyber espionage by Chinese hackers in neighbouring nations is on the rise
Is Your Peloton Spinning Up Malware?
Transforming to a Predictive Cyber Defense
Can *YOU* blow a PC speaker using only a Linux kernel driver?