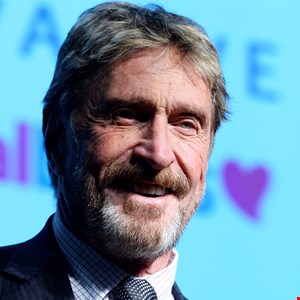 John McAfee was found dead in a Barcelona prison cell  on Wednesday afternoon, June 25 2021. McAfee was 75 years old. The cause of death, according to Spanish authorities, is suspected to be suicide.

An outspoken cybersecurity pioneer and reclusive millionaire, McAfee was being held by Spanish authorities after being arrested in October 2020 at Barcelona’s El Prat airport on charges of alleged tax evasion in the U.S.

A Spanish court ruled earlier in the day on Wednesday June 23 that he could be extradited to the U.S to stand trial.

The tax evasion charges were in addition to charges from the U.S Securities and Exchange (SEC) commission that were also made public in October 2020 about McAfee’s cryptocurrency investments. McAfee was indicted on charges of money laundering and cryptocurrency fraud by the U.S. Department of Justice in March of this year.

In one of his final tweets, sent on June 10, McAfee provided a very sombre view of his time in prison, providing some insight into his state of mind.

“There is much sorrow in prison, disguised as hostility. The sorrow is plainly visible even in the most angry faces. I’m old and content with food and a bed but for the young, prison is a horror – a reflection of the minds of those who conceived them.”

McAfee: The Man and the Company He Hated

John McAfee was born in Cinderford, Gloucestershire, the child of a British mother and a father that was stationed at a U.S Army based in the U.K. He spent much of his early life in the U.S. and got a degree in mathematics.

John McAfee founded McAfee Associates in 1987, as one of the earliest anti-virus vendors in the market. The company McAfee founded had early success in the nascent security market of the late 1980’s and made the man incredibly wealthy. John McAfee himself left the company in 1994 and hasn’t been associated with the computer security vendor that still bears his name for decades.

While McAfee has purposely and actively distanced himself from the McAfee security company, he has remained an active voice in various matters of security and public affairs. Over the years, McAfee has tried to disassociate himself with the company and the core anti-virus technology that bore his name.

One of his most famous diatribes against McAfee anti-virus is a somewhat ‘unsuitable for viewing at work’ ranting video that shows John McAfee snorting white powder while effusively proclaiming he has nothing to do with the anti-virus vendor.

McAfee was quoted and interviewed by Infosecurity Magazine over the years about his views on security. At the Infosecurity Europe 2015 event, the ever combative McAfee spoke on stage with Infosecurity editor, Eleanor Dallaway, and later slamming the state of the security industry in an interview.

“I think there’s more wrong than right in the security industry – because it’s a business like anything and the purpose of business is to make money and survive,” McAfee said at the time.