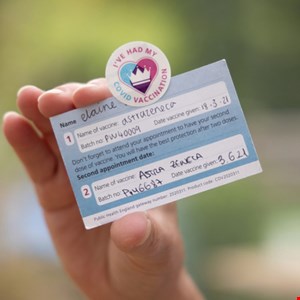 Cybercrime officers in the United Kingdom have arrested two individuals employed by the National Health Service (NHS) in connection with an investigation into suspected fake COVID-19 vaccination records.

On December 14, a 36-year-old man from Ilford, East London, was arrested on suspicion of unauthorized computer access and conspiracy to commit fraud by misrepresentation. Police said that the man has since been released from custody but remains under investigation.

The unnamed woman was arrested on suspicion of conspiracy to commit offenses under section 2 of the Computer Misuse Act, fraud by false representation, and money laundering.

The investigation team have seized two laptops and two cell phones belonging to the female suspect, who is now in police custody.

Police said that both suspects are employed by the same National Health Service Trust.

These latest two arrests by the Metropolitan Police follow other arrests made in Ilford last week in connection with the suspected forgery of vaccination records.

“Misuse of IT systems is extremely serious; we will be analyzing all devices seized and are working closely with our partners.”

Flanagan said that the alleged cyber-criminal activity at the NHS trust did not involve an incursion by an external threat actor but appeared instead to be the result of an insider threat.

“I want to stress that no systems were hacked into from outside of NHS networks,” he said.

Flanagan went on to ask the British public not to keep their suspicions to themselves in cases of suspected inoculation fraud.

“If anyone has information regarding fraudulent COVID-19 vaccination records then it is important you report what you know to Action Fraud,” he said.