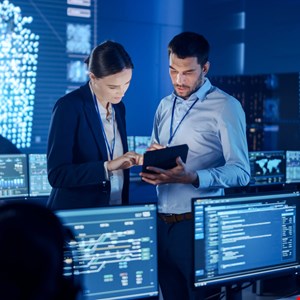 The Port of Los Angeles has opened a new Cyber Resilience Center (CRC) that will detect and protect against cyber-threats that could potentially impact cargo flow.

In addition to providing the port with an early warning system, the center will enable CRC stakeholders – such as tenants and cargo handlers – to quickly share threat indicators and better coordinate defensive responses.

A $6.8m agreement for International Business Machines Corporation (IBM) to design, install, operate and maintain the center was approved by the Los Angeles Board of Harbor Commissioners in December 2020.

“Now more than ever, there’s a critical need for global supply chains to operate securely and undisrupted. We’re honored to partner with the Port of Los Angeles to design and build its Cyber Resilience Center, further strengthening its cyber preparedness,” said Wendi Whitmore, vice president, IBM Security X-Force in 2020.

She added: “As the Port of Los Angeles takes these significant steps to strengthen the cyber resilience of its ecosystem, we’re proud it selected IBM’s premier capabilities in threat intelligence, AI and cloud security to help achieve this.”

The new center’s opening is not the first significant cybersecurity effort undertaken by the Port of Los Angeles. Since 2015, the port has maintained an ISO 27001 certification. In 2014, the port established the nation’s first port-based Cyber Security Operations Center to proactively monitor the port’s digital environment for vulnerabilities and cyber-threats.

Port of Los Angeles executive director Gene Seroka said: “We must take every precaution against potential cyber-incidents, particularly those that could threaten or disrupt the flow of cargo.”

Through the CRC, stakeholders will be offered annual cybersecurity training and have the chance to participate in tabletop exercises.

Christopher McCurdy, general manager of IBM Security Services, said: “The Port of Los Angeles is setting a new industry standard with its first-of-its-kind initiative to increase cyber readiness across the maritime community.”