McAfee Labs have been observing a spike in phishing campaigns that utilize Microsoft office macro capabilities. These malicious documents reach victims via mass spam E-mail campaigns and generally invoke urgency, fear, or similar emotions, leading unsuspecting users to promptly open them. The purpose of these spam operations is to deliver malicious payloads to as many people as possible.

A recent spam campaign was using malicious word documents to download and execute the Ursnif trojan. Ursnif is a high-risk trojan designed to record various sensitive information. It typically archives this sensitive data and sends it back to a command-and-control server.

This blog describes how attackers use document properties and a few other techniques to download and execute the Ursnif trojan.

The malware arrives through a phishing email containing a Microsoft Word document as an attachment. When the document is opened and macros are enabled, Word downloads a DLL (Ursnif payload). The Ursnif payload is then executed using rundll32.exe

Macros are disabled by default and the malware authors are aware of this and hence present an image to entice the victims into enabling them.

Analyzing the sample statically with ‘oleId’ and ‘olevba’ indicates the suspicious vectors..

To get a better understanding of the functionality, we have de-obfuscated the contents in the 2 figures shown below.

An interesting characteristic of this sample is that some of the strings like CLSID, URL for downloading Ursnif, and environment variables names are stored in custom document properties in reverse. As shown in Figure-7, VBA function “ActiveDocument.CustomDocumentProperties()” is used to retrieve the properties and uses “StrReverse” to reverse the contents.

We can see the document properties in Figure-8 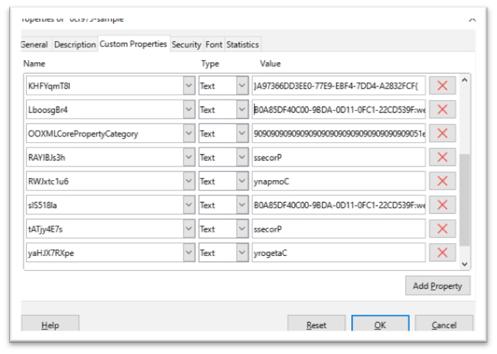 The malicious macro retrieves hidden shellcode from a custom property named “Company” using the “cdec” function that converts the shellcode from string to decimal/hex value and executes it. The shellcode is shown below.

The shellcode is written to memory and the access protection is changed to PAGE_EXECUTE_READWRITE.

The shellcode downloads the file from the URL stored in the environmental variable and stores it as ” y9C4A.tmp.dll ” and executes it with rundll32.exe.

After successful execution of the shellcode, the environment variable is removed.

Macros are disabled by default in Microsoft Office applications, we suggest keeping it that way unless the document is received from a trusted source. The infection chain discussed in the blog is not limited to Word or Excel. Further threats may use other live-off-the-land tools to download its payloads.

McAfee customers are protected against the malicious files and sites detailed in this blog with McAfee LiveSafe/Total Protection and McAfee Web Advisor.

This article was originally published by Mcafee.com. Read the original article here.