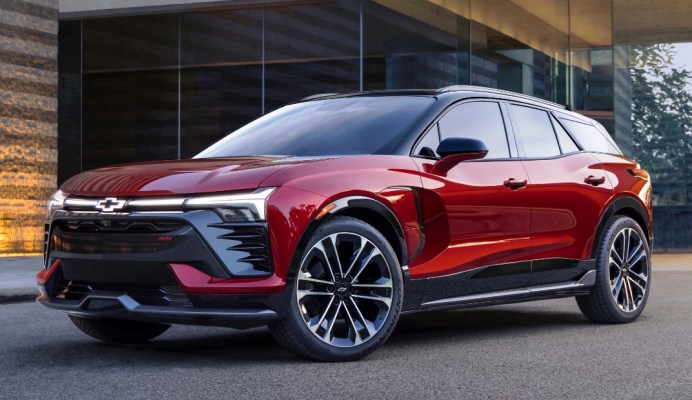 GM’s CEO Mary Barra just revealed the upcoming Blazer EV, and it’s a looker. I love the styling, though I still wish General Motors made the off-roader Blazer from the ’70s and ’80s instead of the people mover from the ’90s.

This is just a first look at the vehicle. Chevy is scheduled to reveal more details at its official unveiling on July 18, and it will be available for sale starting in the Spring of 2023.

Several design elements stick out from the teaser image. As previously announced, this vehicle carries the SS badge and ultra-thin tires, seemingly indicating a high performance trim level. Two, the Blazer EV has a completely different design from the gas-powered Blazer currently on the market — everything from the headlights to the taillights are different. Lastly, the Chevy Blazer EV sports the same grill-spanning lighting scheme found on the Chevy Silverado EV seemingly suggesting this will be a unified design element across GM’s Chevy EV offering.

The Blazer EV is set to be built on GM’s Ultium EV platform. This is the same platform used from the monstrous, 10,000 lbs Hummer EV to the sleek Cadillac Lyriq. The automaker hopes this unified platform will enable it to quickly scale development and production of electric vehicles.

It’s likely the Blazer EV will take center stage among General Motor’s electric lineup. The gas-powered variant is already among GM’s top selling vehicles, sitting in a sweet spot as a mid-size, sporty crossover that’s well-equipped and competitively priced. The Blazer nameplate is well-known, too, going back to Chevy’s answer to the Ford Bronco, the 1969 Chevy K5 Blazer.

Pricing will be key here. I expect the SS trim to be expensive, and positioned as a halo product — something to get people’s attention. There will likely be a less-expensive option that offers most of the range but less of the breakneck speed found in other EVs.