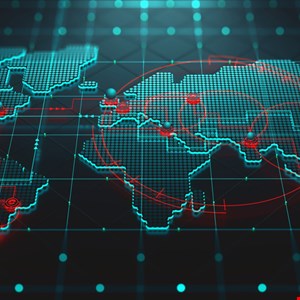 On the opening day of Infosecurity Europe 2022, renowned author and journalist Mischa Glenny provided an insightful overview of cybersecurity and its intersection with geopolitical affairs in his keynote talk.

Glenny began by drawing his audience’s attention to the precarity of the current geopolitical era, described as both “the age of uncertainty” and “the great unraveling.” Glenny warned that cybersecurity issues represented an existential threat, which he included as part of the metaphor of ‘the four horsemen of the apocalypse,’ with Glenny considering the other three as pandemics, weapons of mass destruction and the climate crisis.

Before addressing the issues posed to cybersecurity by the recent Russia-Ukraine conflict, Glenny detailed the historical context of cyber-attacks more generally, discussing everything from the ‘ILoveYou’ computer worm of 2000 to large powers such as Russia conducting KGB-funded cyber-attacks on Estonia in 2007. Glenny then explained that the online space has evolved to one where competition between the great powers is hugely important and cybersecurity and geopolitics are now deeply intertwined, stressing that malevolent actors exist, both within Russia and beyond, and these attacks have implications on civilian populations.

Attention then turned to the Russia-Ukraine conflict, and Glenny asserted that despite media attention being focused on the frontlines, the scale of cyber-attacks has been significant, with intense hacking strongly correlating with “high kinetic sites.” Since the Russian invasion began, there has been a downturn in the deployment of ransomware attacks elsewhere in Europe, as primary actors such as Conti – a sophisticated Russia-based ransomware group – turn their attention to Ukraine. Glenny also stated that ransomware attacks are less lucrative than other forms of malevolent acts such as CEO fraud and business email compromise, cautioning companies and stressing the need for business resilience.

Due to sanctions imposed on Russia and a ban on importing high-end technologies, Glenny told audience members that this focussed Russia’s attention on Ukraine’s abundant raw materials, mostly found in the Dombras region and eastern Ukraine, more generally, and the Black Sea. However, this pursuit of raw materials has broader implications for other parts of the globe, with Russia having operated in the Democratic Republic of the Congo for the past five years seeking rare metals such as gold and lithium.

Glenny detailed that any “positive” news that’s come out of the conflict has been in the form of Russia agitating its largest ally China, with Xi Jinping annoyed by Putin dictating how and when China confronts the West. This, in Glenny’s view, has potentially lessened the chasm between China and the US, which is crucial if the world’s two largest powers are to collaborate constructively in tackling significant existential issues such as climate concerns.

Glenny ended his talk with an appeal for the end to the Russia-Ukraine conflict, to focus minds and “get down to work” to solve humanity’s myriad issues: “for if we’re to resolve the broader crises that we currently face, we need to work together.”